Hubris Atë Nemesis at the Center for Maine Contemporary Art 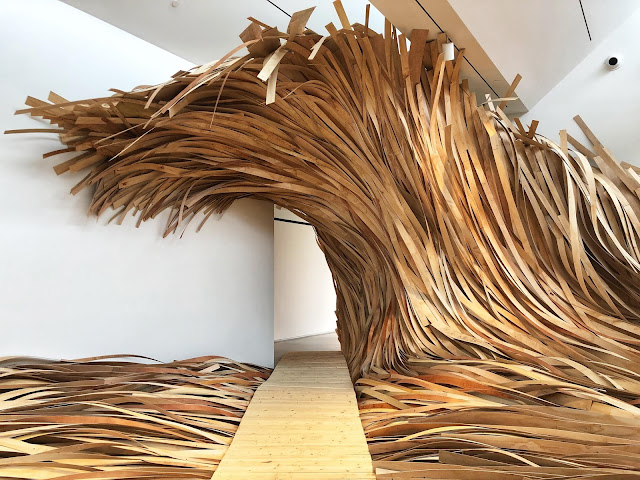 First and foremost let me just preface this post by saying that I'm generally the person who doesn't "get" contemporary art oftentimes having a hard time wrapping my head around what it is that I'm supposed to be looking at. Let's face it, I'm a Monet/van Gogh kinda gal who takes a hard pass at the artwork of Picasso, Matisse, Kahlo and the like. I'm pretty much vanilla in the flavourful world of art but every once in awhile, I'll come across something out of my comfort zone that really gets my attention and makes me think "WOW!" That's exactly what happened recently when I was visiting the Center for Maine Contemporary Art in Rockland, Maine where I turned a corner and saw what looked like a room where ginormous strands of wood had exploded as boardwalks ran amok through them. I was immediately entranced, intrigued and sucked in. 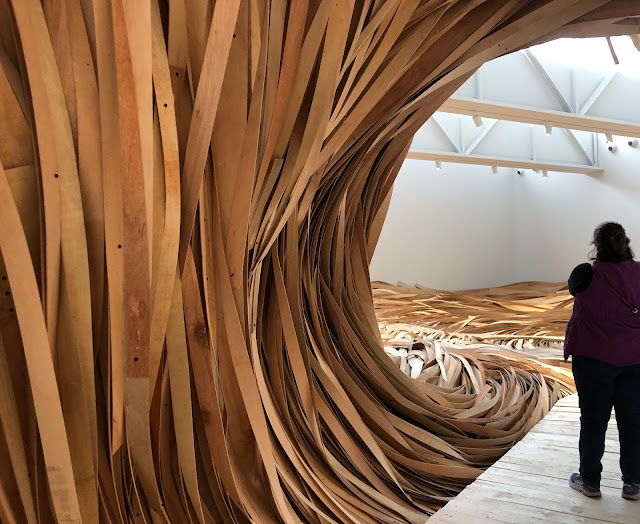 Hubris Atë Nemesis by Maine artists Wade Kavanaugh, of Bethel, and Stephen B. Nguyen, of Portland, is a large-scale, immersive installation that takes up the entirety of the museum's main gallery and it is simply amazing. The piece becomes even more amazing as you step into it and walk around on the undulating boardwalks which seemingly crash into the walls. Some have described it as being in a fun house while I felt like I was walking through the remnants of a storm that had come ashore and wreaked havoc all around. I liked it so much, I went in and out four times trying to take it all in from different angles and marveling at the chaotic precision with which it was put together. 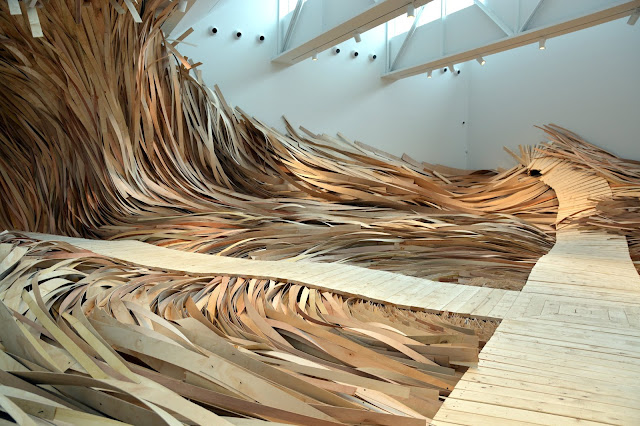 Drawing inspiration for the piece from Maine's rugged coastal landscape, Wade Kavanaugh said, “Our current idea came from a visit to the Homer Studio, partly from the sea, but more from the land-forms along the water’s edge.” Having visited Prout's Neck in Scarborough where Homer Winslow's studio is located and completed the Cliff Walk around it just last summer, I could definitely understand what sort of landscape had inspired the piece and perhaps that gave me a better understanding of what the installation was about and where the artists were coming from.

The title of the installation, Hubris Atë Nemesis, refers to the narrative arc of Greek Tragedies: Hubris symbolizes arrogance and deviation from virtue. Atë refers to an act of folly, a direct consequence of hubris, which provokes the wrath of gods and precipitates their intervention while Nemesis is the retribution of divine justice - painful, but necessary to restore world balance and order. Like many paintings of the Maine coast, the artists hope their installation “captures a moment of suspense in a dynamic system - a snapshot with an uncertain future - and that it appears to be unwritten what the restored natural order should or might become.”

Kavanaugh and Nguyen, who were selected as the first recipients of the highly competitive Ellis-Beauregard Fellowship Award from a pool of more than 200 applicants, only do large-scale installation work with all of their previous installations made from paper. This is the first time they worked exclusively with wood as well as adding a second deviation from their norm - the incorporation of a pathway through the piece as an active element. Typically, the viewer makes contact with the gallery floor when navigating through the artists' previous installations, but in Hubris Atë Nemesis, the path contributes to the experience of the work as a whole. Moving over the undulating boardwalk, the viewer is made aware of the movement of the artwork through their own movement which removes the layer of separation between art and viewer making it a completely immersive experience. 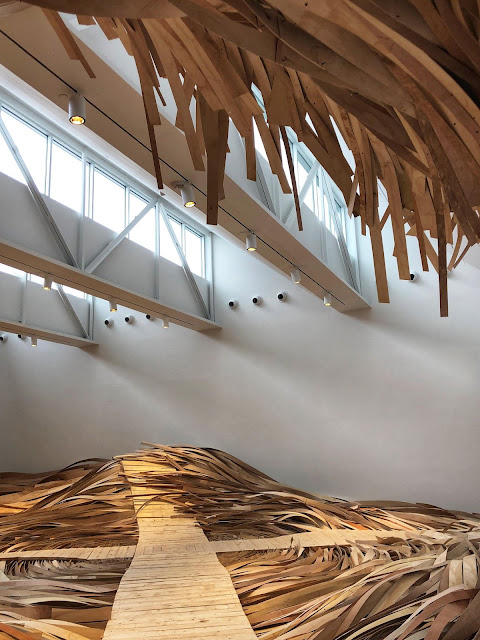 One of my biggest questions for the staff at the CMCA after I had walked through the installation several times and eventually managed to pull myself away from it, was how did the artists put it together and how long did it take them? The answer is that they made a wooden model at their studio in Rumford where they used pieces of fettuccine to get an idea of the layout. The model itself can be viewed in the museum's art lab and though it looks like something one of your kids might bring home from summer camp (anyone else remember making macaroni necklaces?), it does look a bit like the real thing - though on a much smaller and less dramatic scale! 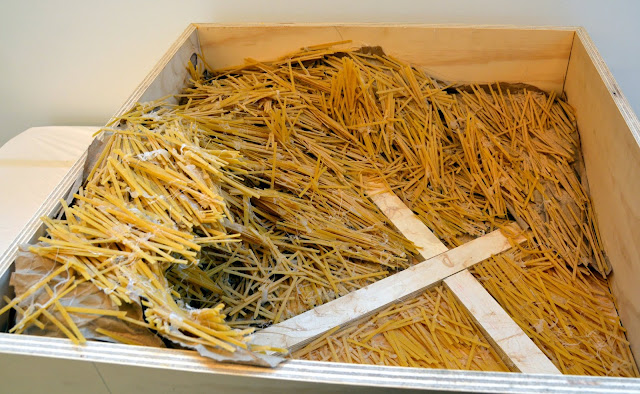 From there, it took the artists along with a team of volunteers and CMCA staff a little more than three weeks to create Hubris Atë Nemesis. First, Kavanaugh and Nguyen laid down the wooden pathway which they had constructed off site in their studio then they built the framework using 2x4s. Over that they layered the strips which were made from 250+ 4 x 8 sheets of luan plywood that were cut on site using a table saw that had been set up on the loading dock. 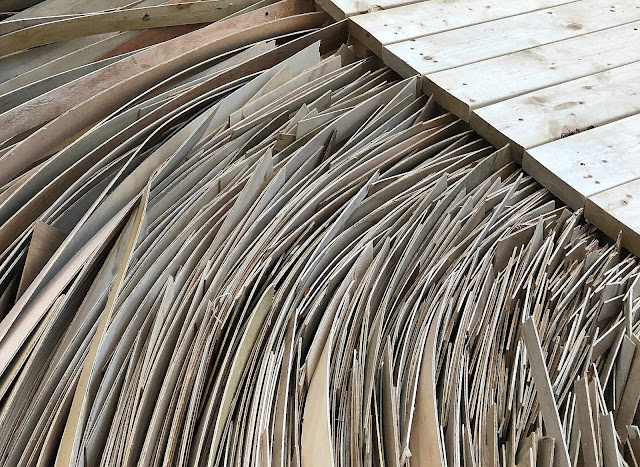 The installation with its topsy-turvy boardwalks and waves of wood will be on view at CMAC until June 16th and is well worth a visit should you fancy a wander up to MidCoast Maine and the lovely town of Rockland. Trust me, it's worth the drive and this is from someone who admittedly usually doesn't get it! If you can't make it to Maine, here are some more photos and a short video. 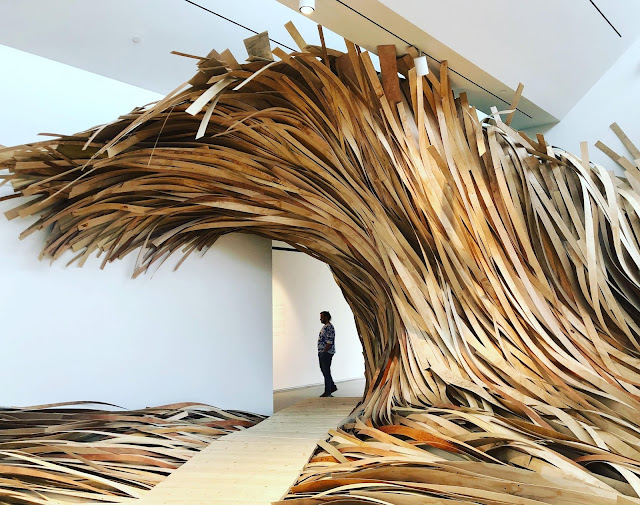 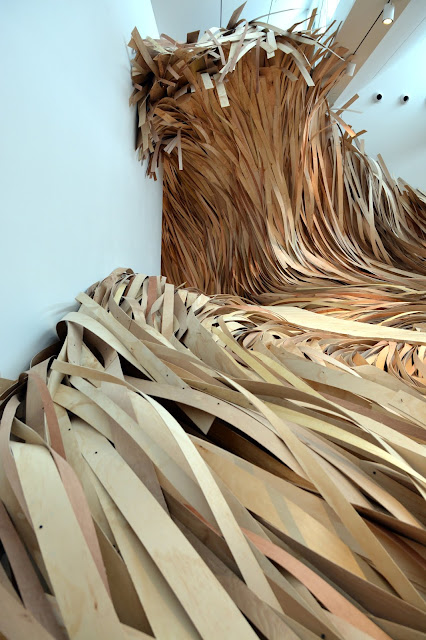 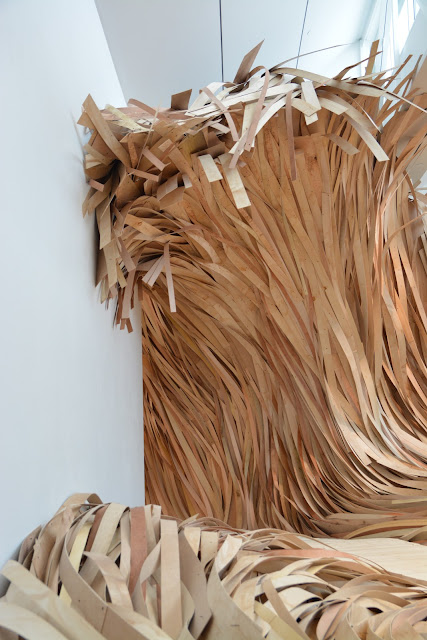 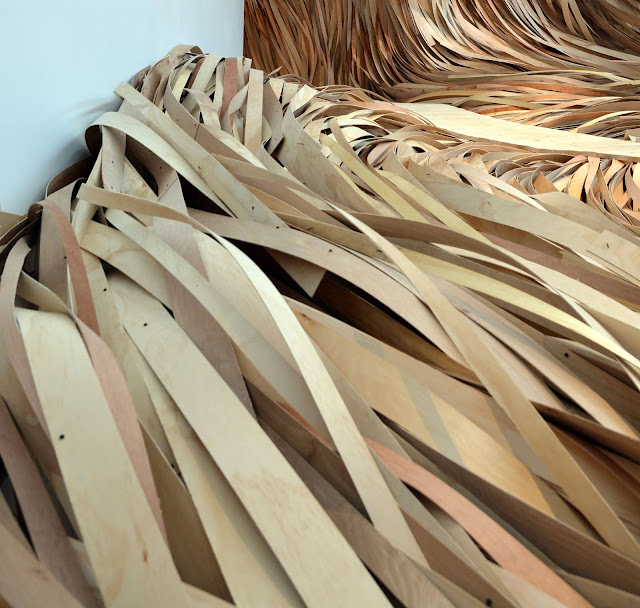 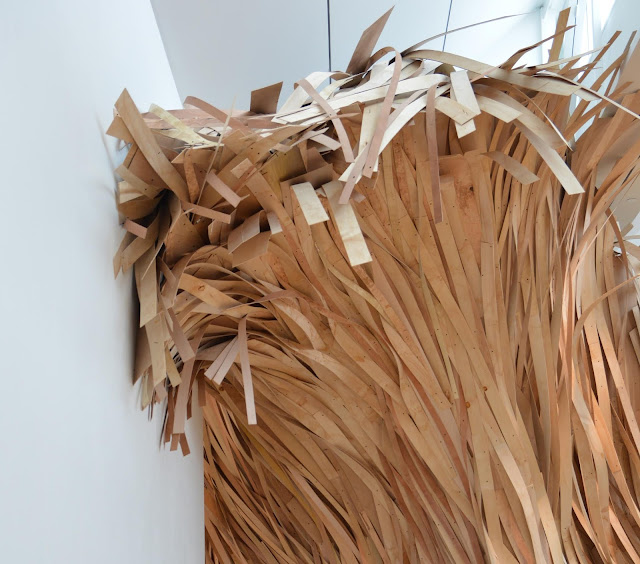 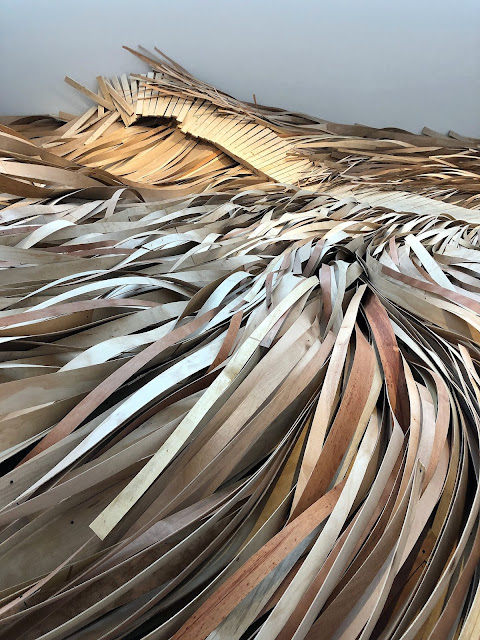 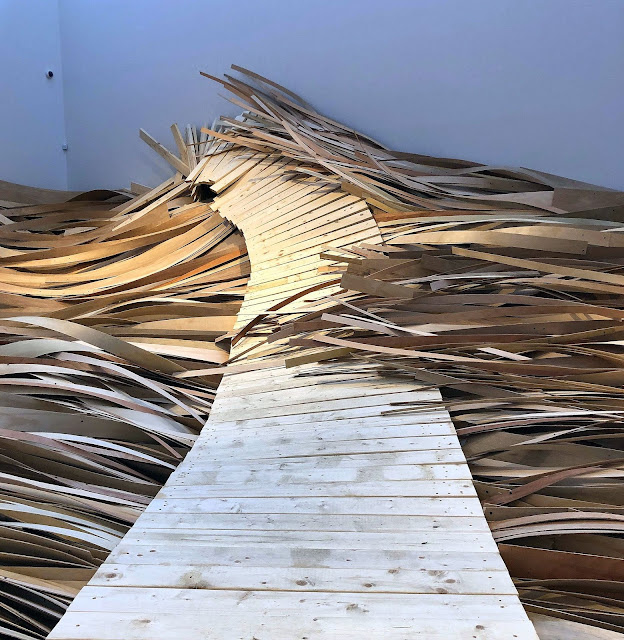 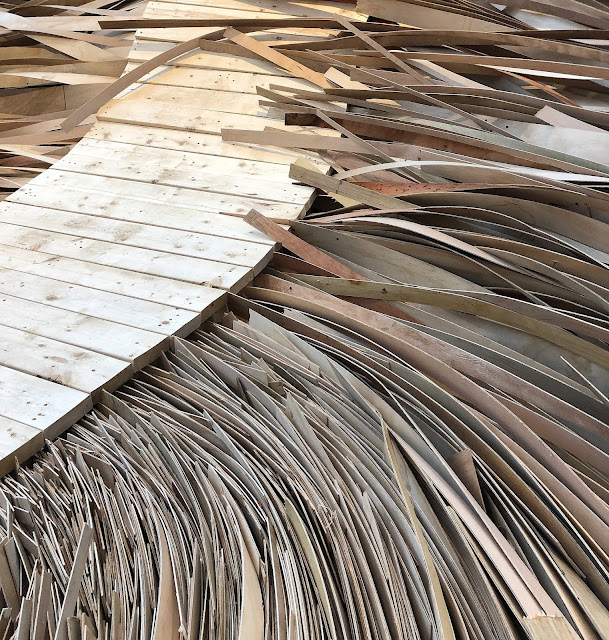 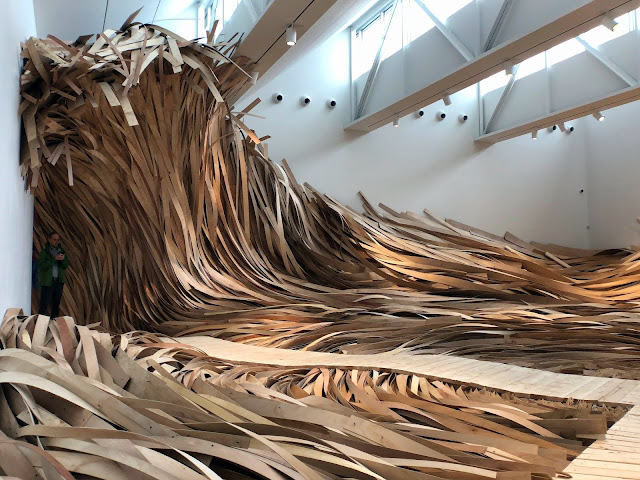 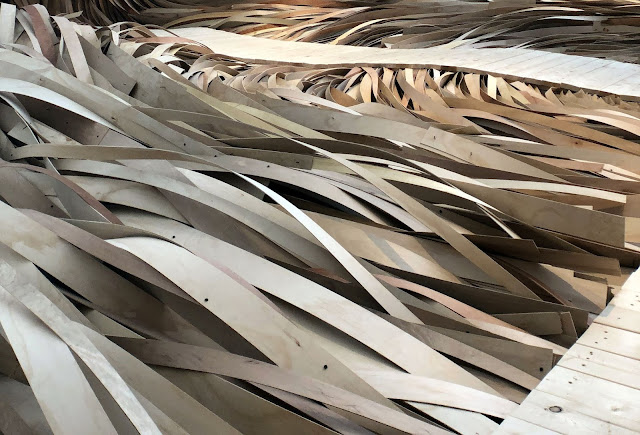 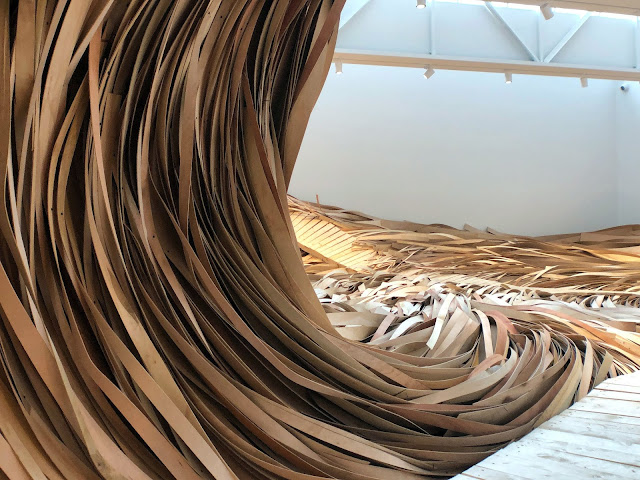 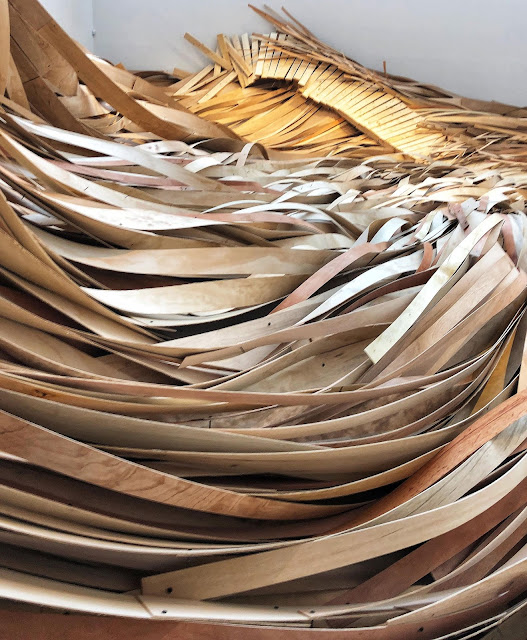