Showing posts from September, 2017
Show all

"It's Alive!" The Art of Horror Comes to Life at the Peabody Essex Museum 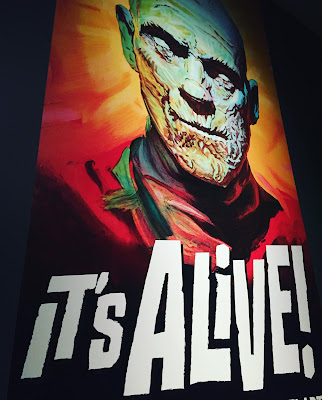 By combining rare and visually arresting works by graphic designers from around the world along with related memorabilia such as lobby cards, film props, costumes and electric guitars into a very artful presentation that depicts how movie publicity campaigns have drawn in audiences throughout the 20th century, Daniel Finamore, the Russell W. Knight Curator of Maritime Art & History at the Peabody Essex Museum in Salem, Massachusetts, has definitely achieved the museum's goal of  “... looking for the sort of material that provides unexpected encounters with art, unexpected emotional responses to art, and things that people don’t necessarily expect to see in a museum." Wait? What? Did that say electric guitars? Yep! It did. Electric guitars. In a museum exhibit. Which totally makes sense as the awesome collection of horror and sci-fi film posters used to create It's Alive! belong to heavy metal guitarist Kirk Hammett who, in his life outside of avid movie art coll
Post a Comment
Location: 161 Essex St, Salem, MA 01970, USA
Read more
More posts