Showing posts from October, 2010
Show all 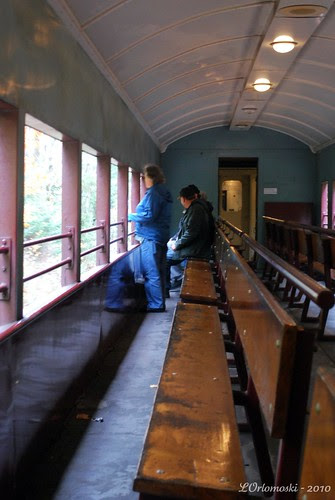 My last post had us on the Conway Scenic Railroad "Notch Train" with our twin diesel engines all finished with their run-around to make the back of the train the front of the train and we were now ready to head back the way we came through Crawford Notch on our 30-mile journey back to North Conway. It was still raining intermittently and there was a semi-cold breeze blowing but I had abandoned the comfort of my seat in the first-class C.P. Reed car bound and determined to get some decent pictures from the open coach car where it was a bit cold but tolerable. Even though Jamie and my mom had both opted to stay "indoors", I wasn't alone as there were a few other hardy souls sharing the car with me on our trip south. In his 1884 guidebook Sweetser's White Mountains , Moses Foster Sweetser wrote that "No other railroad in this region traverses such wild gorges, or looks out on such majestic peaks, close at hand" and I was darned well going to find th
Post a Comment
Read more

Continuing on with our trip on the Conway Scenic Railroad, I believe I left you just as we were all boarded and leaving the station to make our journey to Fabyans Station via the beautiful Crawford Notch in the White Mountains of New Hampshire, right? Ah yes, there's everyone comfy and cozy in their first class seating on the C.P. Reed car (though I think that one woman was wondering why I had lifted the camera above my head to take a picture!) ... As we pulled out of the station the clouds were getting a lot darker and a bit of rain was starting to fall (sigh, it figures!) so I wasn't exactly sure what sort of pictures I was going to be able to get but I was sure going to try to at least get a few semi-decent shots!  According to our narrator on the trip (a lady who apparently had a nice seat back in the lower dome section of the Dorothea Mae car behind us), we were going to pass over the Saco River three times during our journey north so I tried to get some shots of the r
Post a Comment
Read more
More posts