By Linda - April 26, 2019
Should you find yourself wandering in the Midcoast Maine region and you'd like to take in some art of a different nature, a short drive off of Route 1 as it passes through Thomaston will lead you to the Langlais Sculpure Preserve in the town of Cushing at the former homestead of Maine-born artist Bernard "Blackie" Langlais.

Langlais, an oil painter for many years before putting down his oil paints and brushes in 1958 to begin creating art from wood instead as he felt it was a more intuitive medium for him, is best known for his sculpture the "Skowhegan Indian" which stands 62 feet tall atop a 20-foot-tall base. Dedicated to Maine's Abenaki Native American tribe - "... the first people to use these lands in peaceful ways" - the sculpture is located on High Street behind a local Cumberland Farms about 45 miles north of Augusta in the town of Skowhegan. During the summers of 1949-51, Langlais attended the Skowhegan School of Painting and Sculpture, located just outside of Skowhegan in the town of Madison, and it was for that reason along with a recommendation by a fellow artist, that the Skowhegan Hospitality  Tourist Association chose Langlais to create their planned monument to Maine's Native Americans in 1967.

Challenging the Association's original concept for the commission of a 30-foot figure figure with headdress, loin cloth and tomahawk, Langlais' completed sculpture instead represented an Abenaki man with fishing weir and spear standing at over twice the proposed height. After working on the project for two years in the front yard of Langlais' property in Cushing, the "World's Tallest Indian" was trucked 75 miles to Skowhegan and erected in June 1969 in observance of Maine's 150th anniversary.

Langlais' former homestead and studio in Cushing where the Skowhegan Indian and many more wooden sculptures came to life, is now a part of the Langlais Art Trail as the Langlais Sculpture Preserve. One of more than 50 sites that make up the art trail across Maine, the sculpture preserve is located on a portion of Langlais' homestead where he lived with his wife Helen from the 1960s until his death from congestive heart failure in 1977 at the age of 56.


After undergoing a $2.5 million renovation that took approximately 5 years, the preserve began welcoming visitors in 2012, inviting them to walk along a short trail in the 5-acre sculpture park while taking in some of Langlais' creations. Owned and operated by the Georges River Land Trust of Rockland, Maine, the park celebrates Langlais' artistic legacy as well as the natural resources of the Cushing peninsula - all for free! 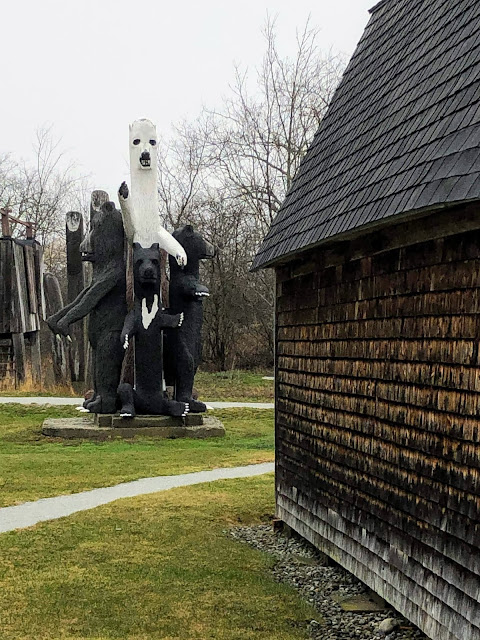