Showing posts from February, 2016
Show all

Dating back to before America's Civil War days, Manchester, Vermont has long been a destination for tourists who flocked to this idyllic New England town nestled between the Taconic Range and Green Mountains to enjoy unsurpassed beauty, peace & quiet, and fly-fishing on the Battenkill. The town is home to Equinox Mountain - the highest summit in the Taconics with an elevation of 3,850 feet that features a spectacular Skyline Drive; the flagship store of  Orvis  - a family-owned retail and mail-order business specializing in high-end fly fishing, hunting and sporting goods founded in 1856;  Hildene, The Lincoln Family Home which was the 412-acre summer estate of Robert Todd Lincoln and his wife Mary Harlan Lincoln along with their three children built in 1905; the Southern Vermont Arts Center - a nonprofit art center featuring both visual and performing arts in a National Historic Trust Mansion on the slopes of Mount Equinox; and the American Museum of Fly Fishing which
1 comment
Location: 3835 Main St, Manchester, VT 05255
Read more

"Intersections" at the Peabody Essex Museum is Simply Powerful 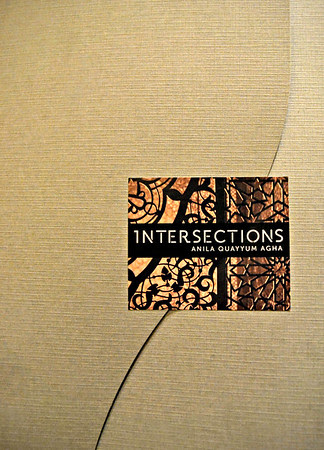 NOTE : This exhibition ended on July 10, 2016 During a recent "Instagram-friendly" press preview at Salem's Peabody Essex Museum , Sona Datta, the curator of South Asian Art who joined the museum in 2014 following her eight-year tenure as a art historian and curator specializing in the visual culture of South Asia at the British Museum, London, spoke about the museum's new immersive art installation by Pakistani-American artist Anila Quayyum Agha entitled Intersections . The new installation located in the Wheatland Family Gallery on the second floor just off of the museum's East India Marine Hall, consists simply of a five-foot laser-cut wooden cube painted black with the same pattern repeating on all six sides. Suspended in the center of the gallery, when illuminated from within by a single, bright light inside the cube, intricately patterned shadows are cast onto the floor, the ceiling, the walls and the gallery visitors. These patterns of shadow an
Post a Comment
Location: 161 Essex St, Salem, MA 01970, USA
Read more
More posts