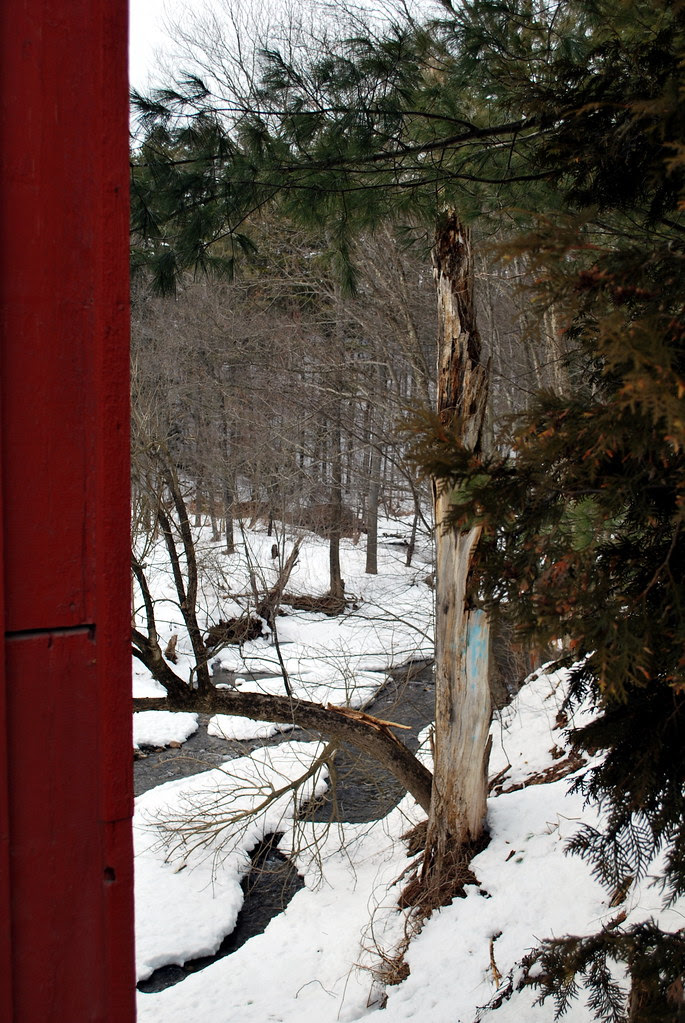 Three more of Vermont's very pretty red covered bridges are up for this post as I continued my journey from Stowe to the small Village of Northfield located west of Montpelier.  Northfield has the second highest amount of covered bridges in the state with five bridges but as it was starting to get to be late afternoon and I wanted to get back to Lyndonville before dark, I opted to just photograph three of the five covered bridges being that three of them are all within a quarter mile of each other on the same road that passes over the winding Cox Brook, a tributary of the Dog River. 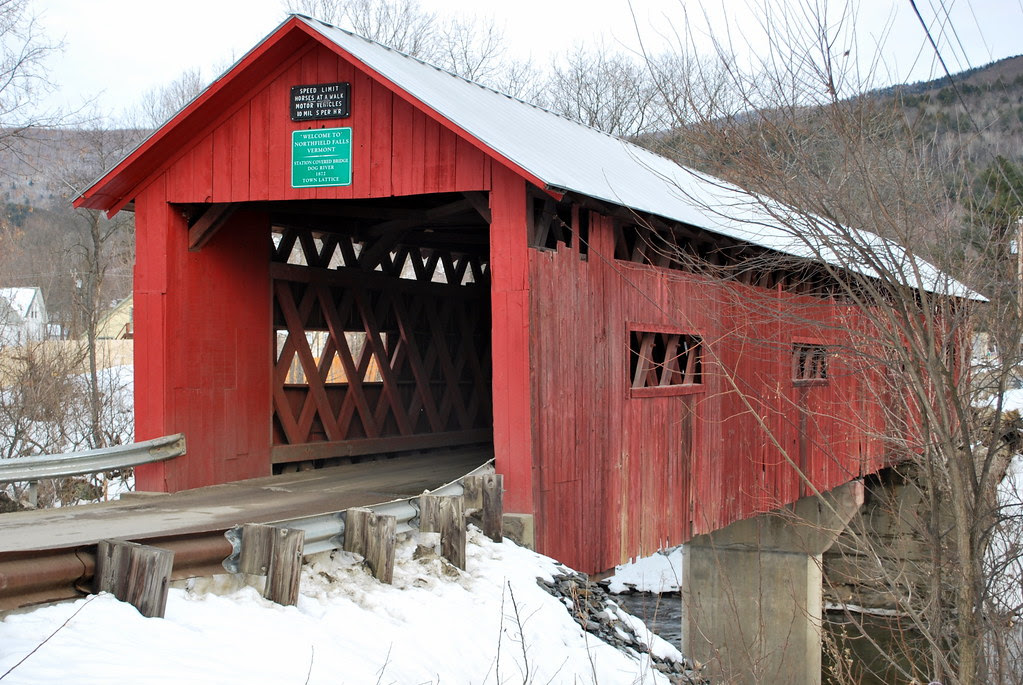 The first of these, the Northfield Falls Bridge aka the Station Bridge, was built in 1872 in the Town lattice truss style, a style that was widely used on many early timber bridges and later in building construction. It is the longest bridge in Northfield at 137 feet long - more than twice as long as any of the others. 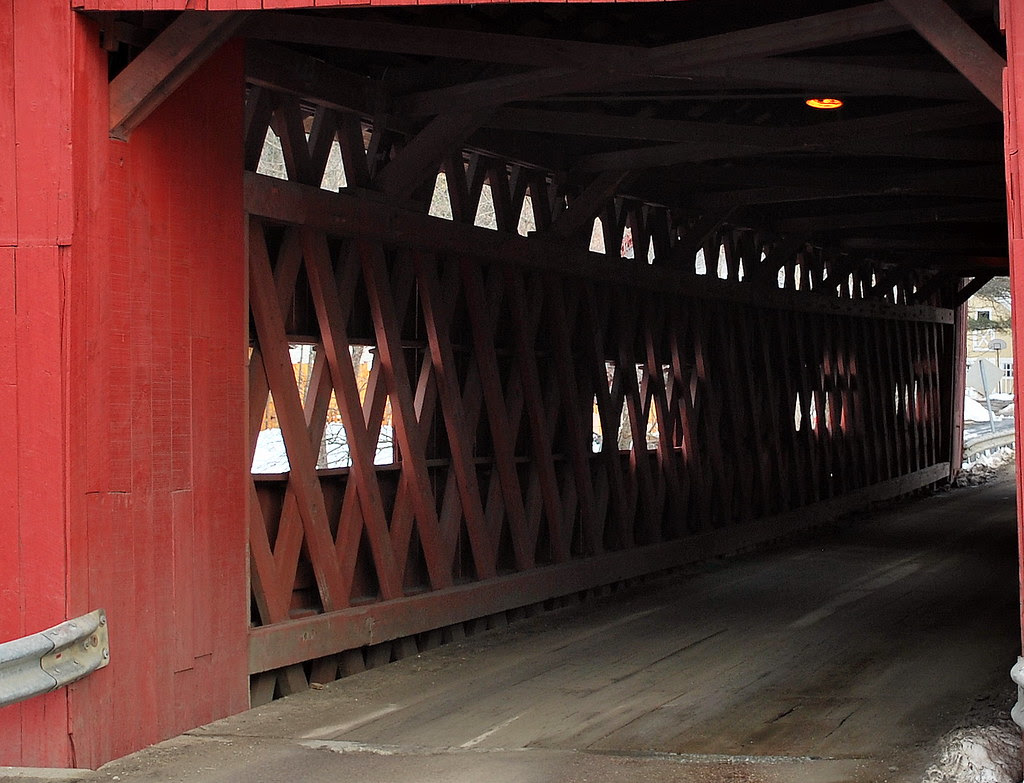 The Upper and Lower Cox bridges were built soon after the Northfield Falls bridge on Cox Brook Road and both are of the Queenpost truss construction that I've mentioned before. 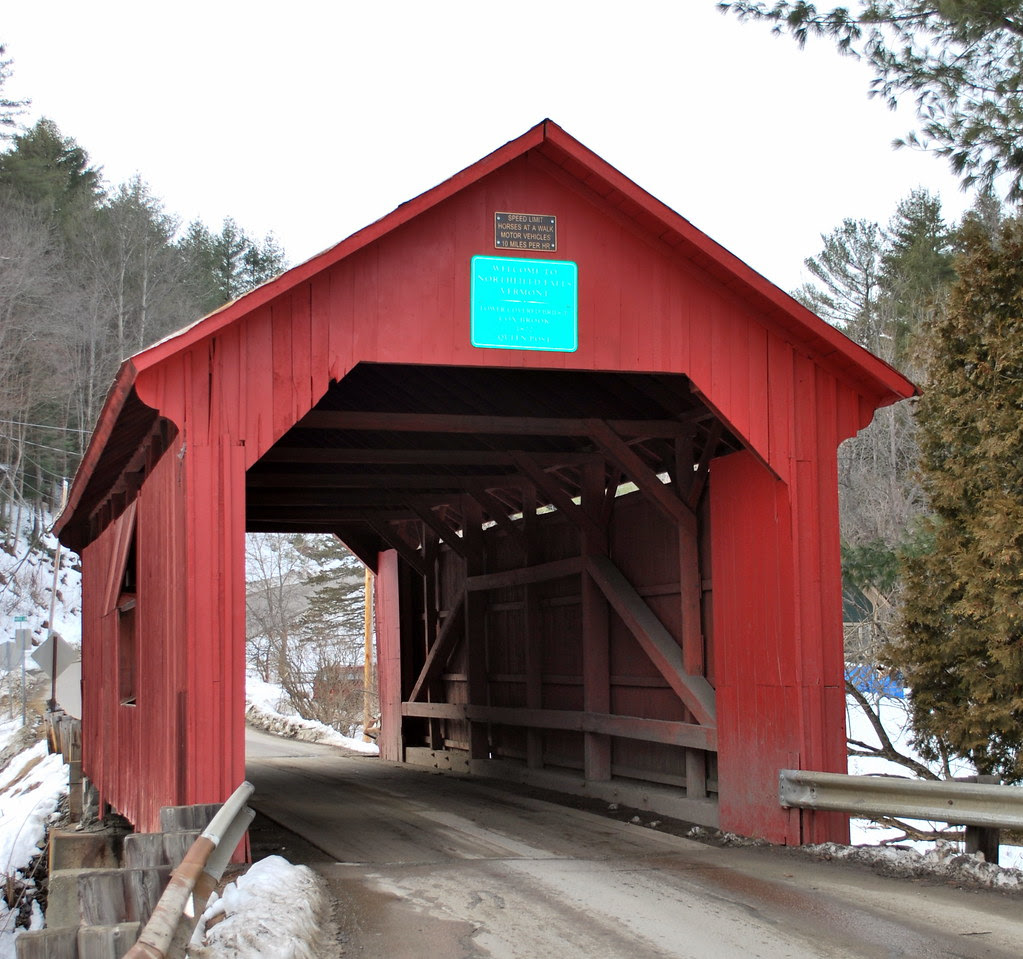 Lower Cox Bridge, also known as the Second Bridge, is 56 feet long.  If you stand at the south portal, you can take a picture of the Northfield Falls Bridge (and vice versa I believe though I honestly forgot to check!). 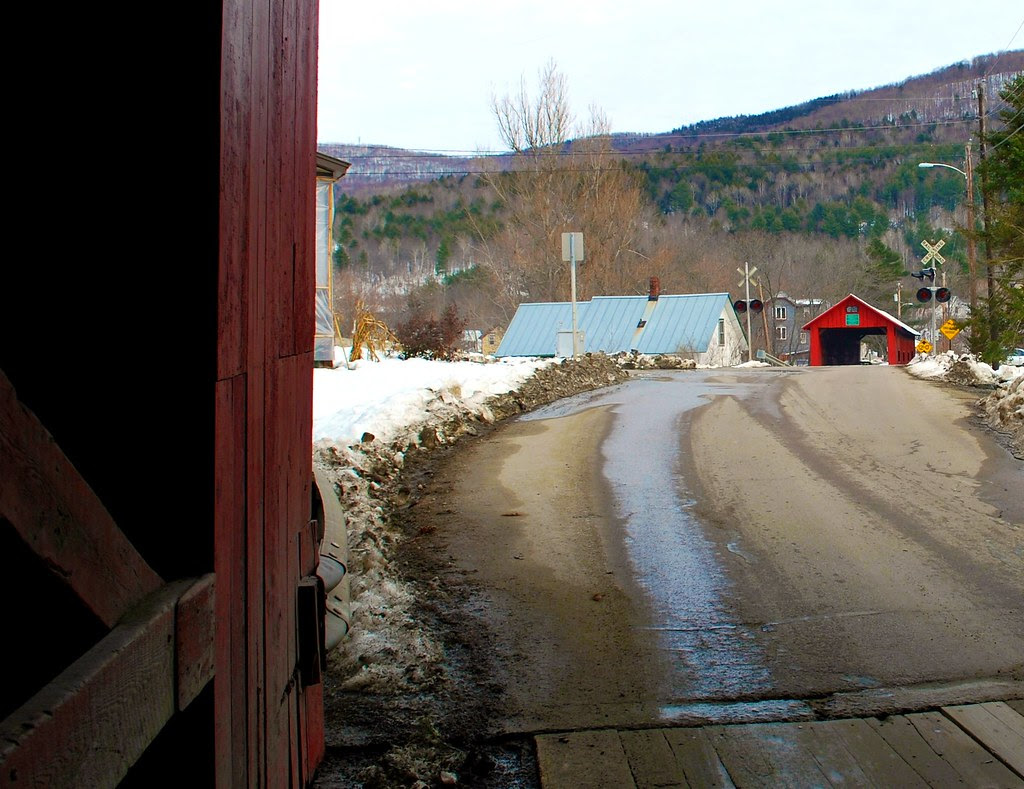 This is the only place in Vermont where you can take a picture of one bridge from the portal of another so that was pretty cool.  Of course, what would have made it even more cool was if a train had come down the railroad tracks that run between the two bridges but alas, I don't have any more luck with trains in Vermont than I do in Connecticut! 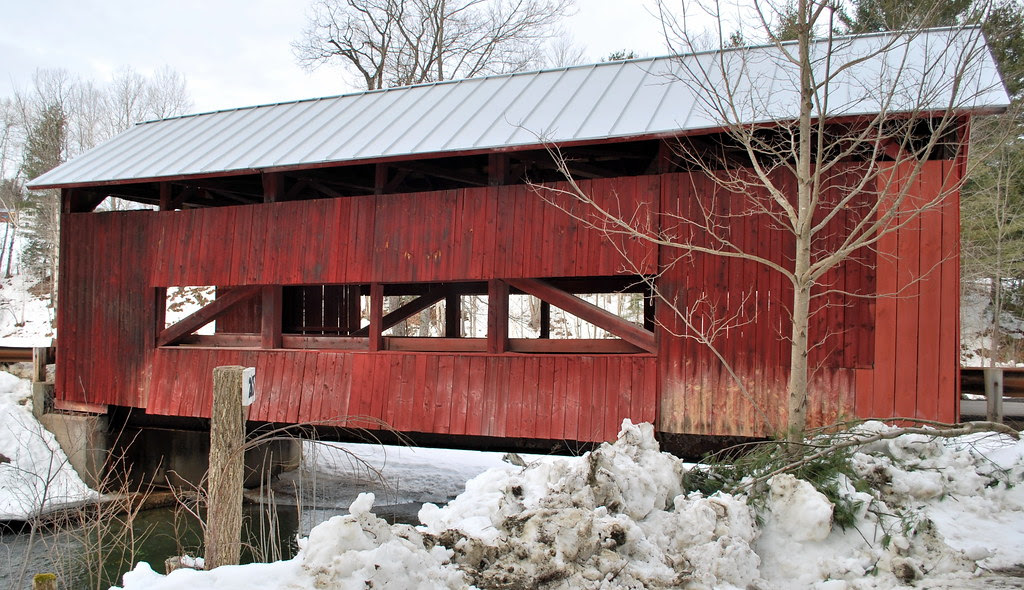 The final bridge in the series is Third Bridge aka Upper Cox Brook Bridge and it's 51 feet long.  In 1966 four steel beams were added to this bridge to strengthen it. 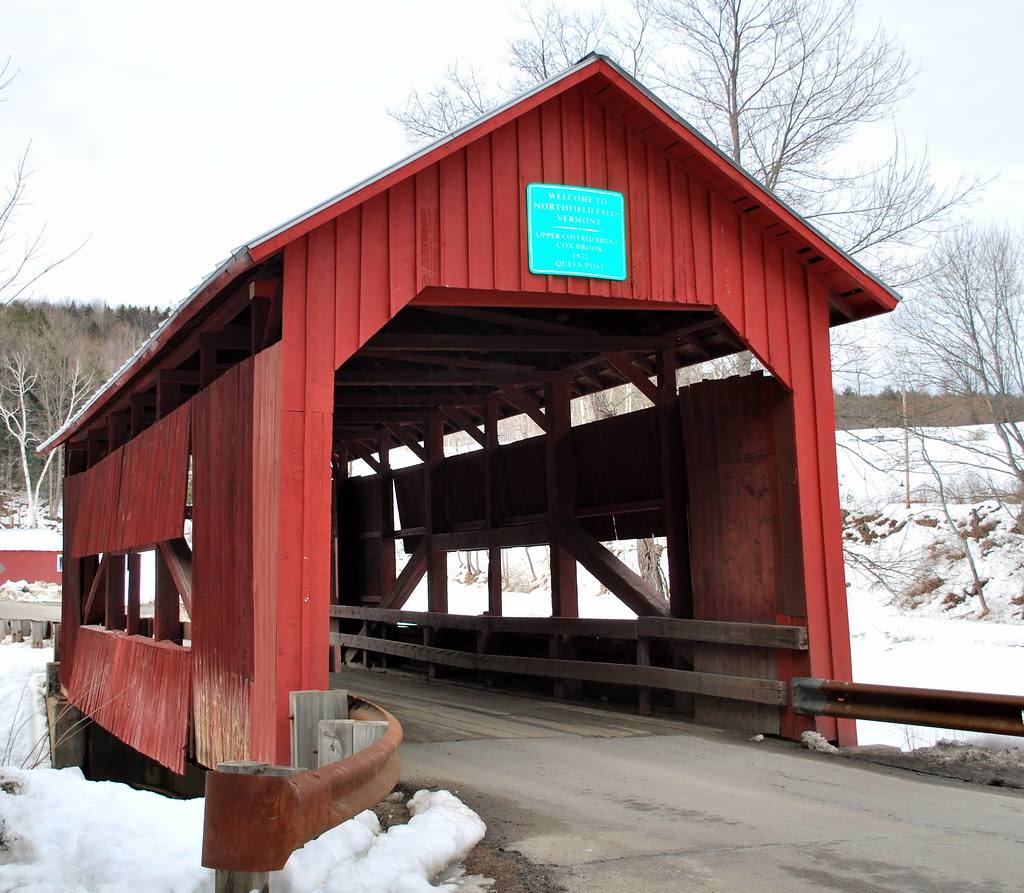 As you can see, this bridge has more of an open construction which might make it a nice place to fish from in the summer provided you remember to stay close to the side as it's not exactly wide in there!

After getting pictures of the three Cox Brook Road bridges I pointed myself east and made the drive back over to Lyndonville where I was able to just catch the sun going down in the west though unfortunately it had clouded up quite a bit and it wasn't the gorgeous sunset I would have liked.  Still, I guess this one would just have to do! 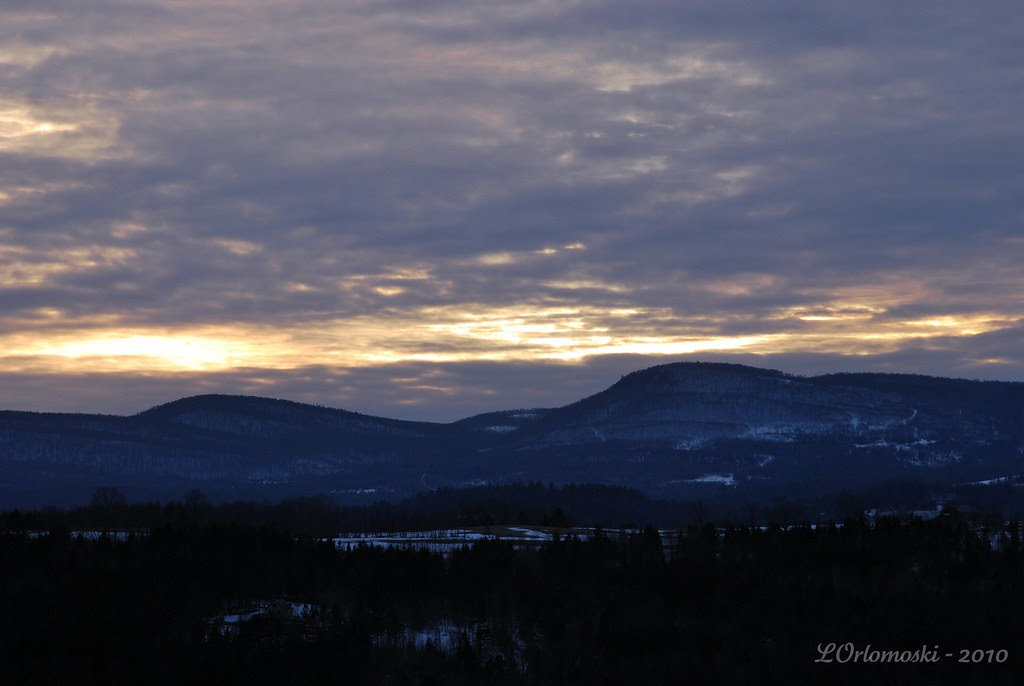 I've got about six more covered bridges to go that I took pictures of on my last day in Vermont and then I can stop boring you to tears with them - at least until I get a chance to get back up to Vermont and find some of the bridges in the western part of the State!