By Linda - March 16, 2010
Now, where were we? Oh yes! After scaring up all the pictures I needed at Emily's Bridge, I consulted the handy-dandy tourist map that the clerk had given me in Stowe, reprogrammed the GPS, and made my way down some of the muddiest roads ever in search of my next covered bridge - the Red Bridge in Morristown just a touch north of Stowe. 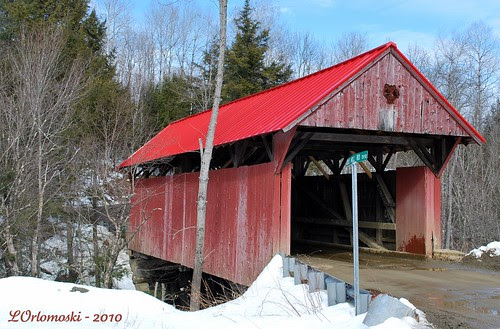 Also known as the Sterling Bridge, the appropriately named Red Bridge was built in 1896 and is a combination of Kingpost and Queenpost Truss. The bridge is 63’-4” long, 13’-9” wide, and spans Sterling Brook on Cole Brook Road. As you can see, Cole Brook is quite a ways down! 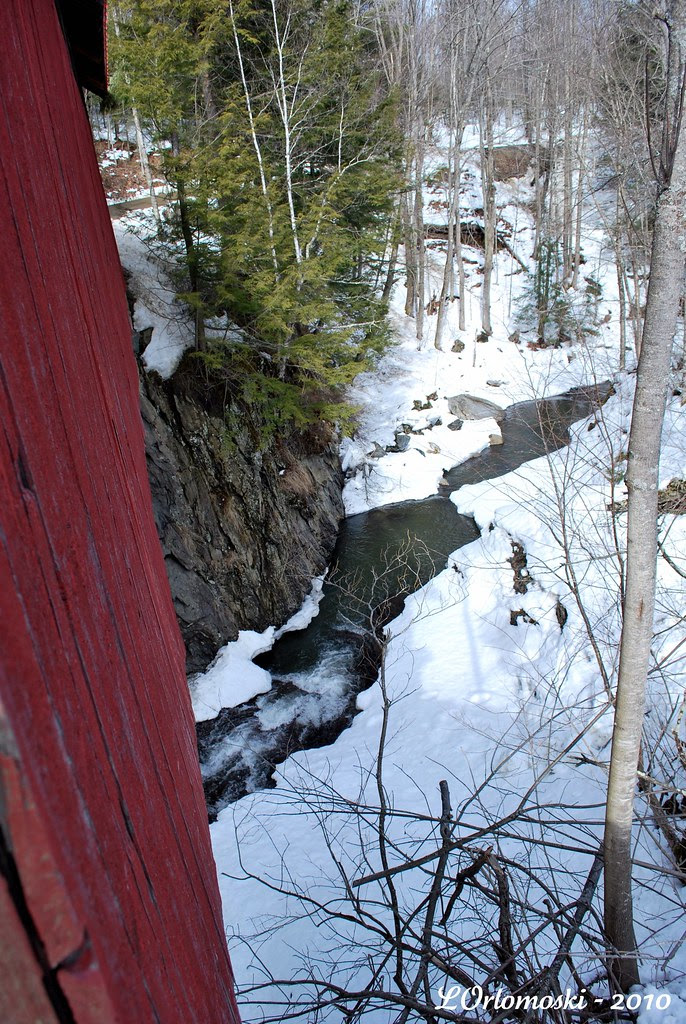 As you can also see, there was mud aplenty not just on the road in front of the bridge but inside the bridge itself - 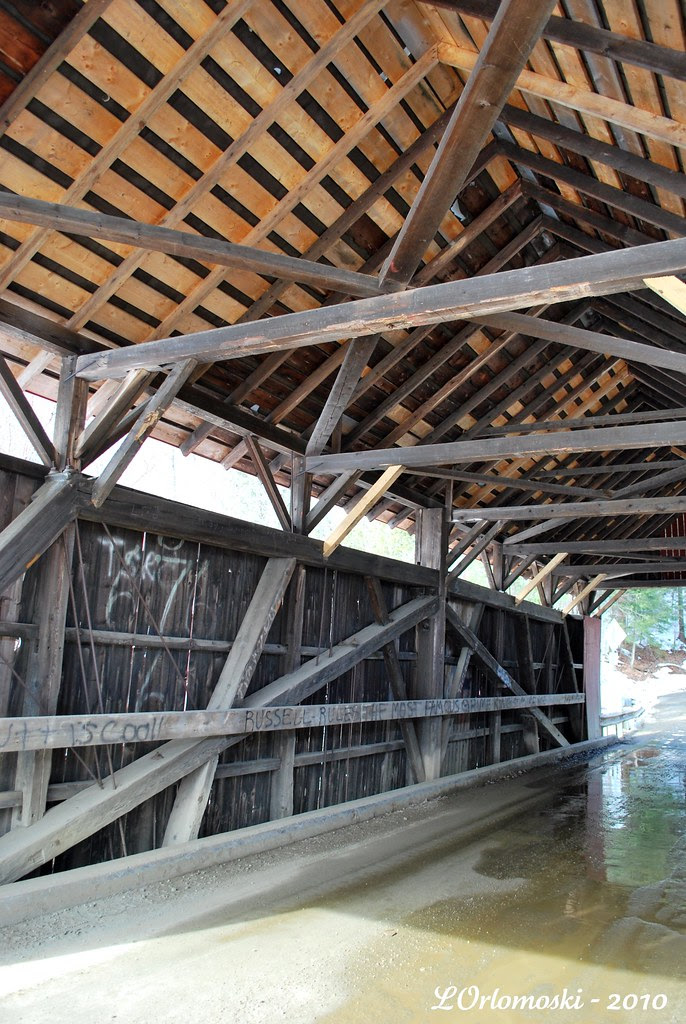 The thing I liked best about this bridge - other than that it was the first red one that I found along my journey! - was the rusted flower decoration above the portal.  I wish I knew how long it had been there but alas, there was no telling. 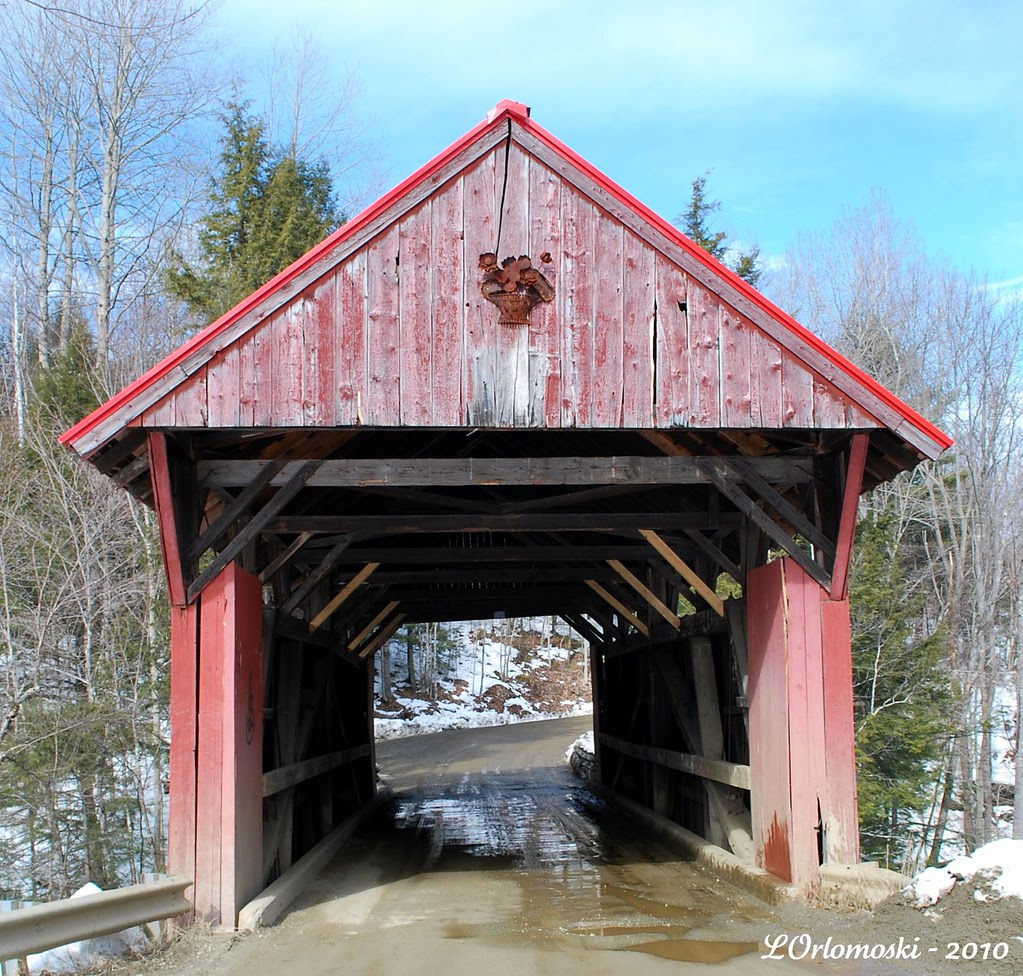 May I also just add that even though it felt like I was out in the middle of nowhere with this bridge, while I was taking pictures at least three or four cars went over it and I was darned lucky not to get covered with mud as it splashed up from their tires as they zoomed by!  Obviously they were a lot more used to driving in the mud than I was but still, you'd think they could slow down at least a tiny bit!

Before leaving the Red Bridge, I consulted my handy-dandy tourist map yet again and took off towards the other side of Stowe in search of the last covered bridge in that particular area - the Brookdale Bridge off of Route 108, the main road that will take you all the way up to Smuggler's Notch if you stay on it. 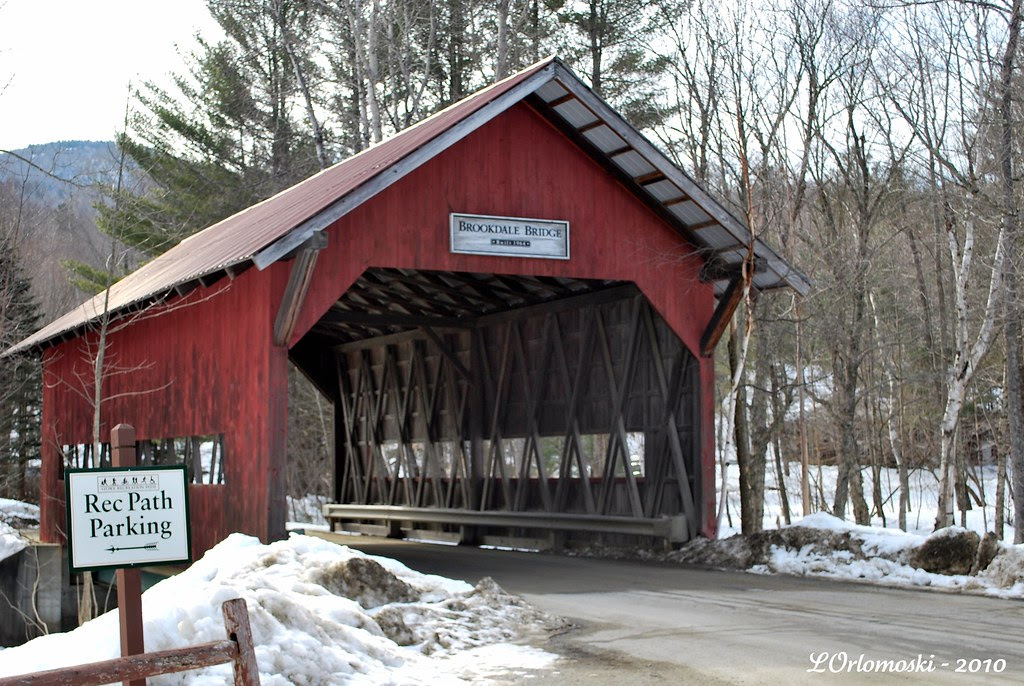 Built in 1970 - which makes it not very old at all especially by covered bridge standards! - this pretty red bridge is built in what's called the steel stringer style and spans the west branch of the Waterbury River - though to be honest, I thought it was more like a brook! 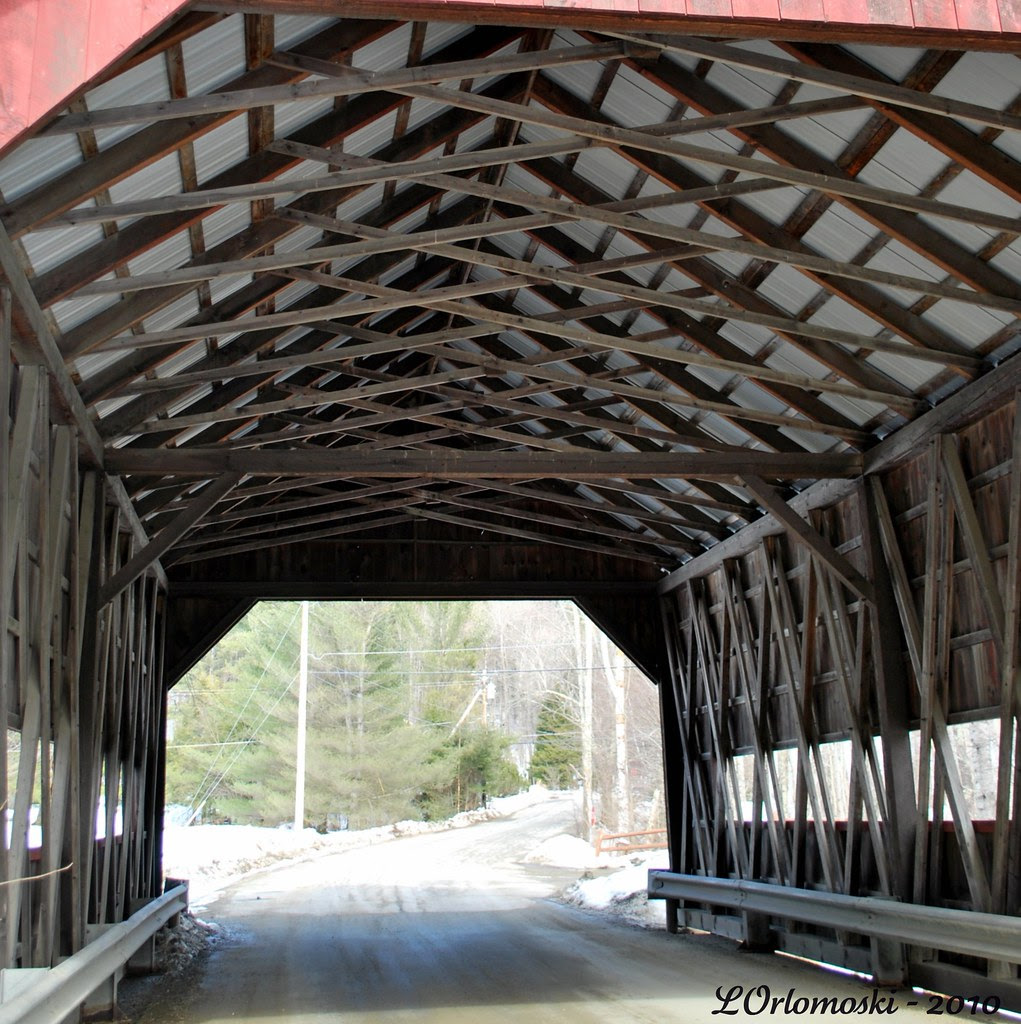 Looking inside the Brookdale Bridge aka the White Caps Bridge, you can just tell that it's a newer style based on the steel guardrails that line both sides of a bridge wide enough for two lanes.  The roof looks pretty new, too!  Still, it's a pretty bridge even if it is younger than me! 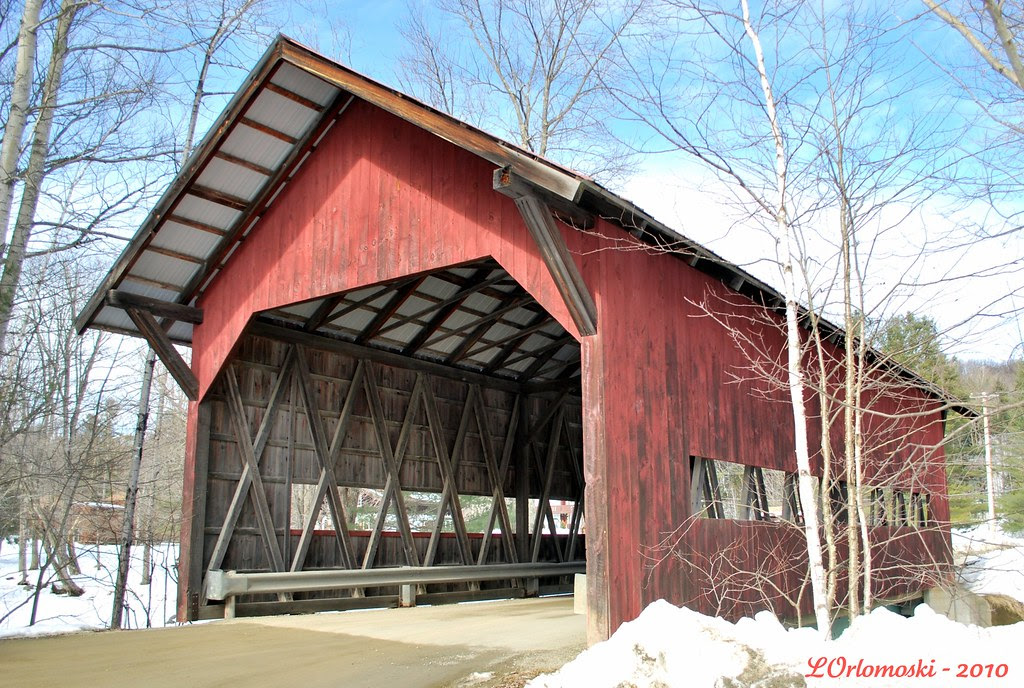 The bridge is located in a very pretty area and the view from inside is certainly pure Vermont! 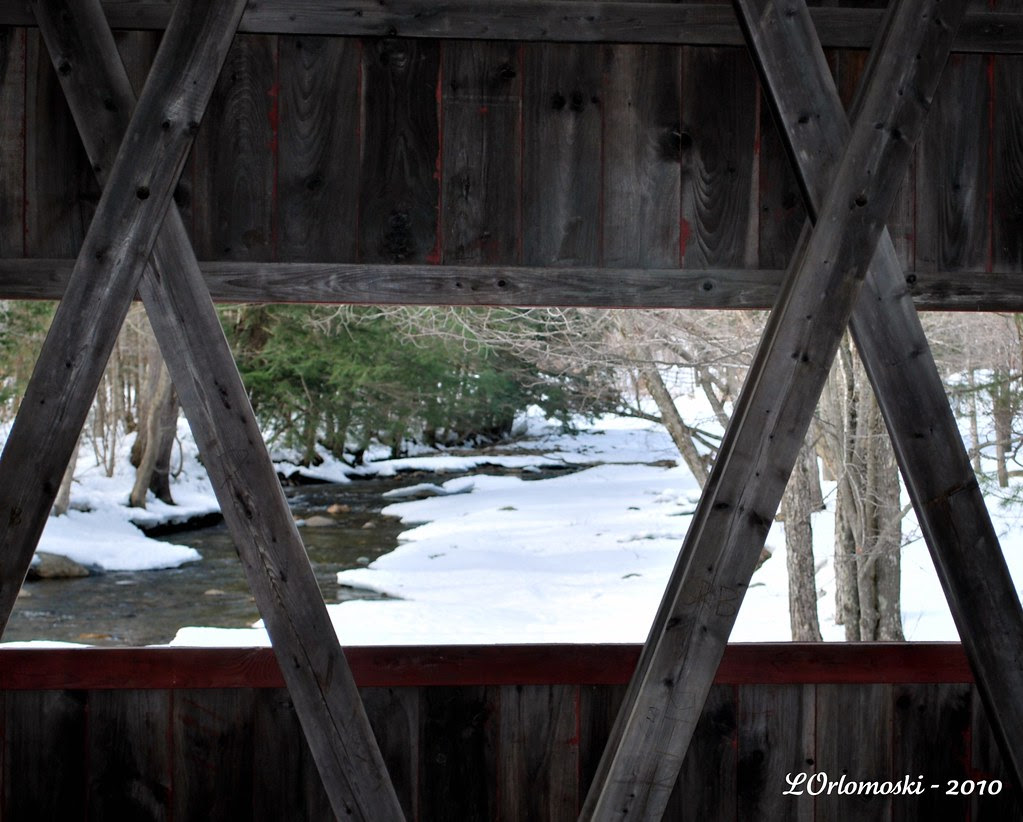 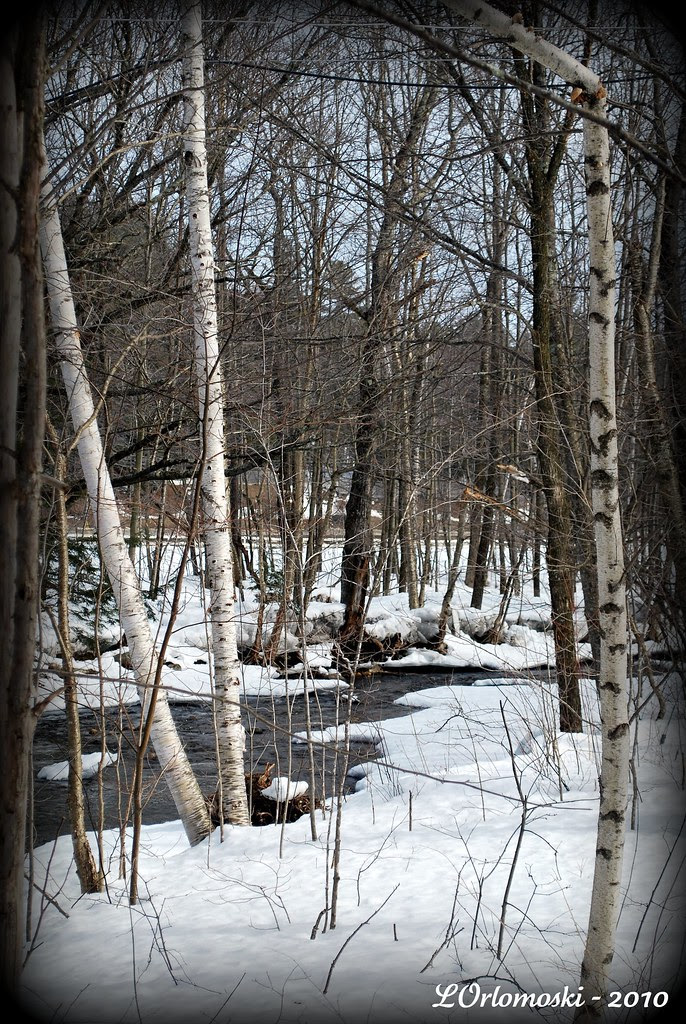 What more could a tourist ask for??