Stalking Stephen King ... Well, Sort of But Not Really! 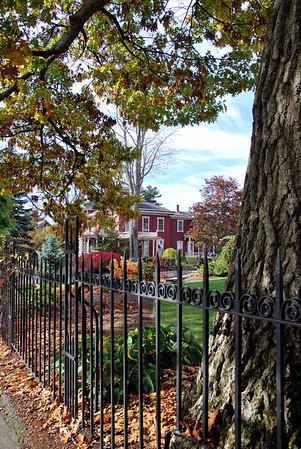 For years and years, I was completely and totally terrified to spend any time whatsoever in the State of Maine due to the fact that I had read way too many Stephen King novels and short stories and was beyond certain that the place was filled with the likes of creepy clowns, various vampires, and more monsters than you could shake a stick at.  Irrational?  Yes. True?  You betcha!

It wasn't until 2010 when I finally decided that enough was enough and came to the conclusion that there were way too many lighthouses in Maine for me to continue to be afraid to visit the land where Pennywise tormented small children, Richard Straker noshed on local citizens, and  pets and dead children came back to life - among other things.  It was way past time to screw up my courage and visit "Vacationland"  so since then I've made the journey to Maine several times and quite enjoyed the beauty of the place - though always casting a watchful eye around me as the words "We all float down here!" still reverberate in my head while I wait for one of the undead to come shambling out of the woods.

On a recent trip, I found myself spending a night in the Bangor area en route to Lubec - a small town that sits on the easternmost edge of the country - and decided that since I was in the neighborhood, I should stop by the house of the man who had kept me out of Maine for all those years.  After all, Stephen King had obviously been reading my mind when he wrote all of those stories that scared the beejeebers out of me so it only seemed fitting that I pop by his place and take a few photos.  After all, it was more than easy to find after a quick search on the internet and as lots of other people had taken photos of his house and wrought-iron gates over the years, I figured he wouldn't begrudge me a few quick shots. 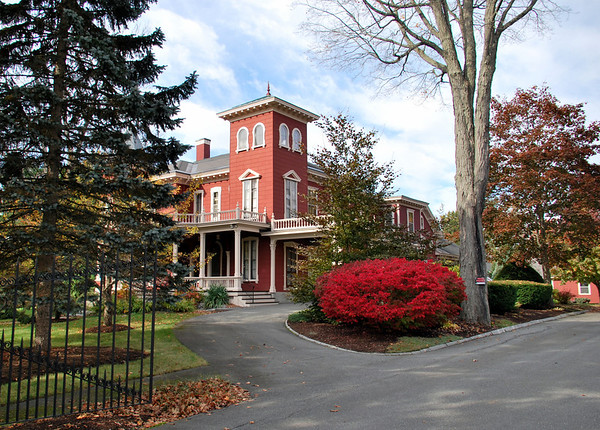 When my friend Claire (who was visiting from England) and I first approached the house we were the only folks who had parked on the very wide street in the very pleasant neighborhood of beautiful homes and there was neither hide nor hair of the crowds of visitors I had read rumors about which was fine by me as I prefer to do my stalking alone though several other people arrived and took photos during the short time that we were there.  Not wanting to appear like a stalker or obsessed fan-girl, I simply wanted to get a few photos and then continue on towards Lubec and lighthouses.

The wrought-iron fencing and gates that surround the lovely old house are quite nice and certainly befitting of a man whose books could keep a reader up all night jumping at the tiniest little noise. They weren't garish or overly ornate but simply whimsical in a somewhat creepy sort of way that I'm sure my daughters would love!  Spiderwebs and bats and a three-headed dragon adorned the gates - one of which was nearly destroyed in a September 2010 accident when a woman slammed into the gate with her car as she swerved to avoid another car.

The custom-built gate and fence that was designed by Stephen King and erected in 1982, was put back together again by Leaman Allen of Allenfarm Fence Company in October of 2010 - a feat that was rather tricky given the intricate details of the job but which was done beautifully for if you didn't know ahead of time that the gate had been smashed up quite badly, you never would have guessed.

The gate pictured above (which is guarded by bats, one of which is pictured below) wasn't the one that was run down but instead is the gate that the leads to the driveway and is guarded by a three-headed dragon - which is pretty doggone cool if you ask me!

As beautiful as the red house was though - and it was - I have to say that I quite liked the white house that stood across the driveway from it and which was also surrounded by an iron fence - albeit one that didn't have the spiderwebs, bats, and dragon of the fencing around the red house but which was quite nice in its own simple, unadorned way.  Rumor has it that the white house is where Stephen King actually lives and perhaps looks out the windows of the turret tower on the left-hand side of the house and laughs as he watches people take photo after photo of "his" house while he peacefully enjoys the comforts of home right under the unsuspecting noses of the crowds. 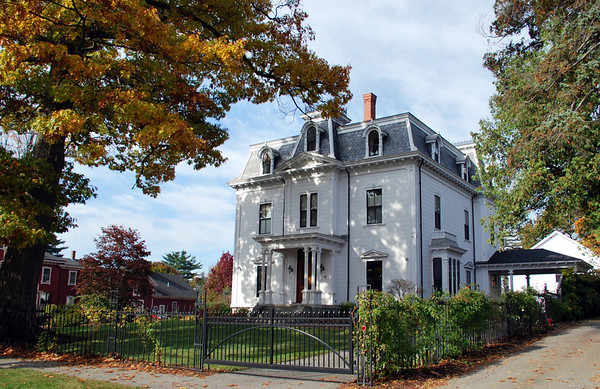 Ya know, if he did that sort of thing I've got say  that I wouldn't be at all surprised.  After all, the man kept me out of Maine for most of my life, no doubt he'd have no trouble keeping people out of his front yard, too, and who could blame him when you've got people like myself popping by to take photos? Not I! Though Stephen King really did owe me ... and now we are settled! Just no more clowns, okay??