For those of you who are not familiar with the Frog Bridge you're missing a lovely piece of American roadside kitsch that has attracted people from miles and mile around to the former city of Willimantic, Connecticut (the city government was dissolved in 1983 with the area reverting back to the Town of Windham from which it was incorporated in 1893 as a section of). Officially known as the Thread City Crossing, the new bridge replaces an older bridge 900 feet to the east that carried Windham Road in Willimantic from Route 32 across to Route 66.  The original bridge was built in 1857 and though plans were drawn up in 1872 for a new bridge, it wasn't until 1991 when the State of Connecticut finally approved funding for a new bridge. 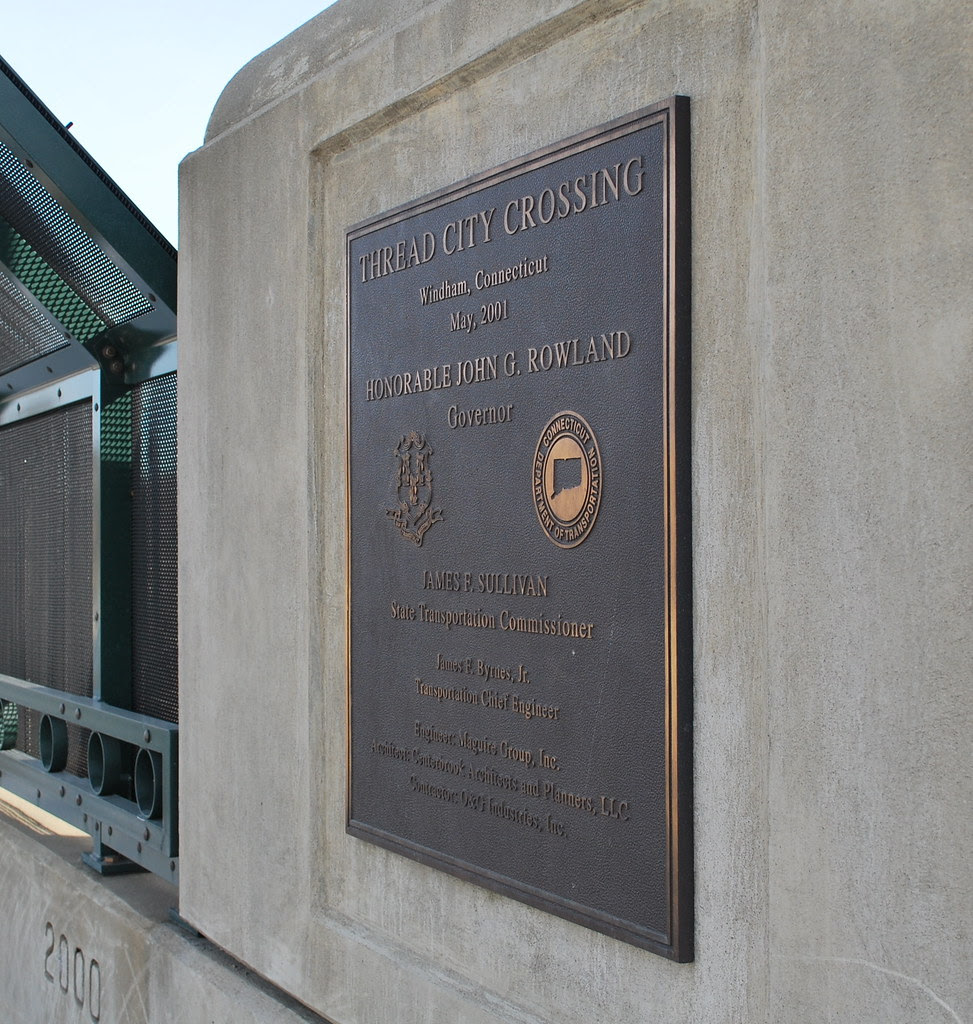 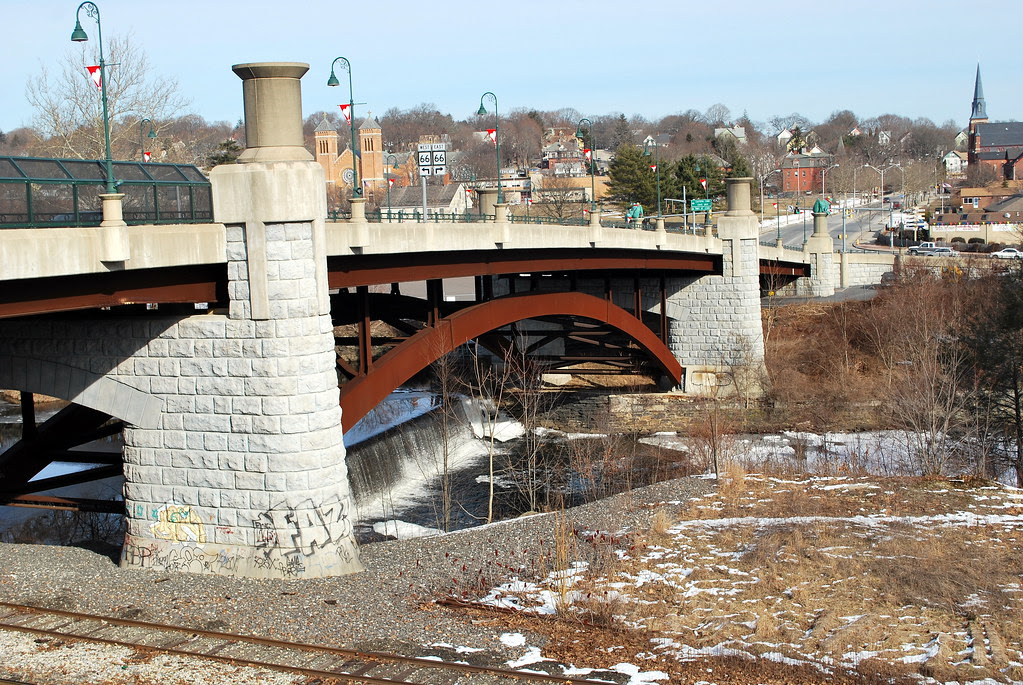 After the State DOT presented their plans for the new bridge, local residents deemed it to be too bland and pressured the State for something with a little more character.  Surprisingly the State relented and an architect was brought on board who weaved a little bit of history and a little bit of whimsy into the final design. Both of those elements are represented in these giant spools of thread topped by 12-foot tall bronze frogs. 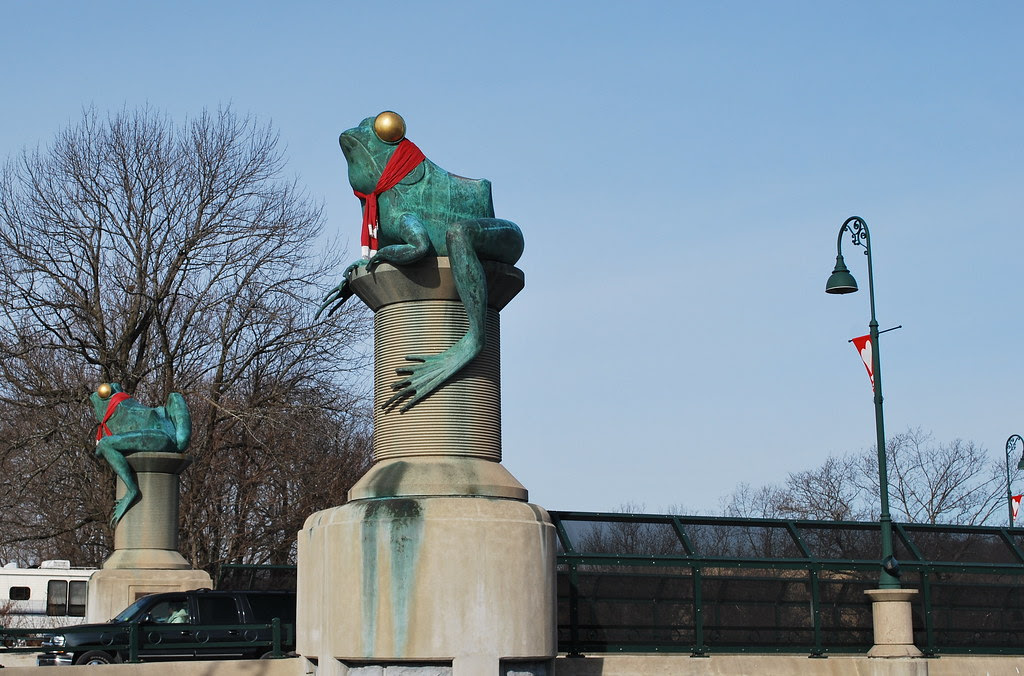 Why spools of thread and frogs you may ask? Elementary, my dear readers! Once known as "Thread City", Willimantic was the headquarters of the American Thread Company - one of the world's leading thread manufacturers. Windham Mills, the old thread factory - or the Tread Mill as my old Yankee grandfather called it! - is in sight of the bridge and that's why there are not only the eight large cement spools on the bridge but also the smaller ones that support the decorative lampposts. Now as for the frogs ... Windham's frogs are quite legendary and even graced the side of my high school class ring long before they sat guarding the ends of the Thread City Crossing.  The reason for that can be found in the following account of Windham's famous frog fight which is condensed from David E. Phillips' Legendary Connecticut:


"In 1754 Windham's Colonel Eliphalet Dyer raised a local regiment to fight in the French and Indian War. Those left behind felt vulnerable to attack. The Windhamites worst fears seemed realized during a steamy-hot June night when unearthly screams emanated from the darkness: Valiant villagers grabbed muskets and fired blindly into the night.' Some believed that the Day of Judgment had arrived, and gave prayer. Others hid under their beds. .

The awful truth was revealed at dawn. Several hundred dead and dying bullfrogs were discovered in a dried-up millpond, two miles east of the village center. They had fought to the death in futile attempts to find moisture in the drought-ridden pond. Windham became forever known as the scene of the "Battle of the Frogs." 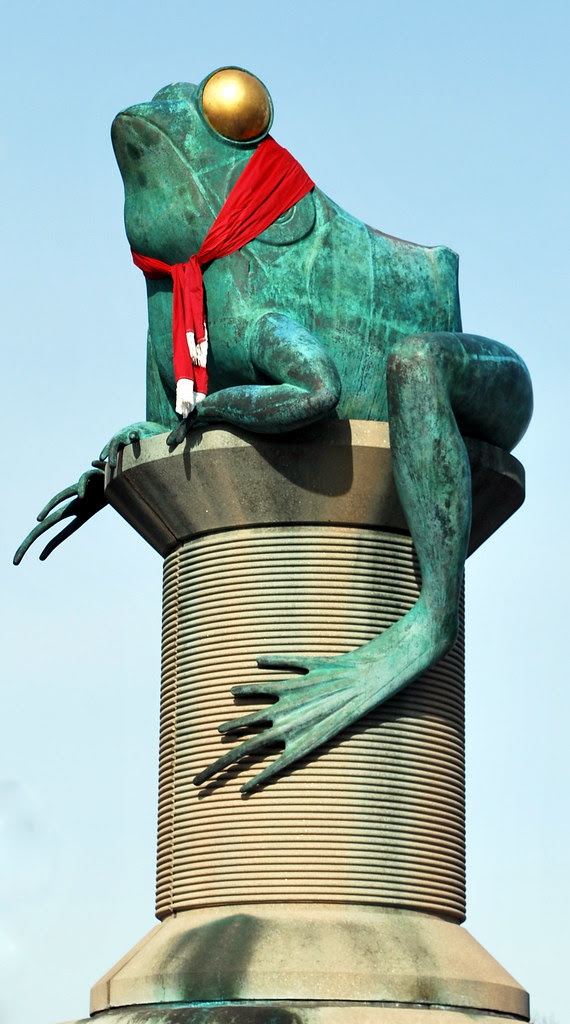 Well, stodgy New Englanders or not, if you can't have a sense of humor about something like that then there's something wrong with you so descendants of the embarrassed residents later made the bullfrog-on-a-spool the town symbol and sat that symbol prominently at the ends of the the most prominent gateway to the city of Willimantic. I've got no doubt that it was those large bronze frogs, sculpted by Leo Jensen of Ivoryton, Connecticut, that helped the Federal Highway Administration in making its decision to award the Frog Bridge an Honorable Mention for Excellence in Highway Design in the category of Historic Preservation in 2002!

In 2004, the Town of Windham gave the four giant frogs "official" names - Willy, Manny, Windy and Swifty. The names Willy and Manny combine for Willimantic; Windy is for Windham; and Swifty is a reference to Willimantic, which is Algonquin for "the land of the swift running water". I'm not sure who is who, though! Perhaps a reader can help us out with that one?

Personally, frogs have always sort of creeped me out - especially the giant golf ball-eating ones at the Chanticlair Golf Course in Colchester - but I have to admit that these guys are rather handsome - especially when sporting those jaunty red scarves for winter.  As long as I don't have any strange dreams about being chased by huge green frogs then I can definitely see the whimsy here and I always appreciate the history! 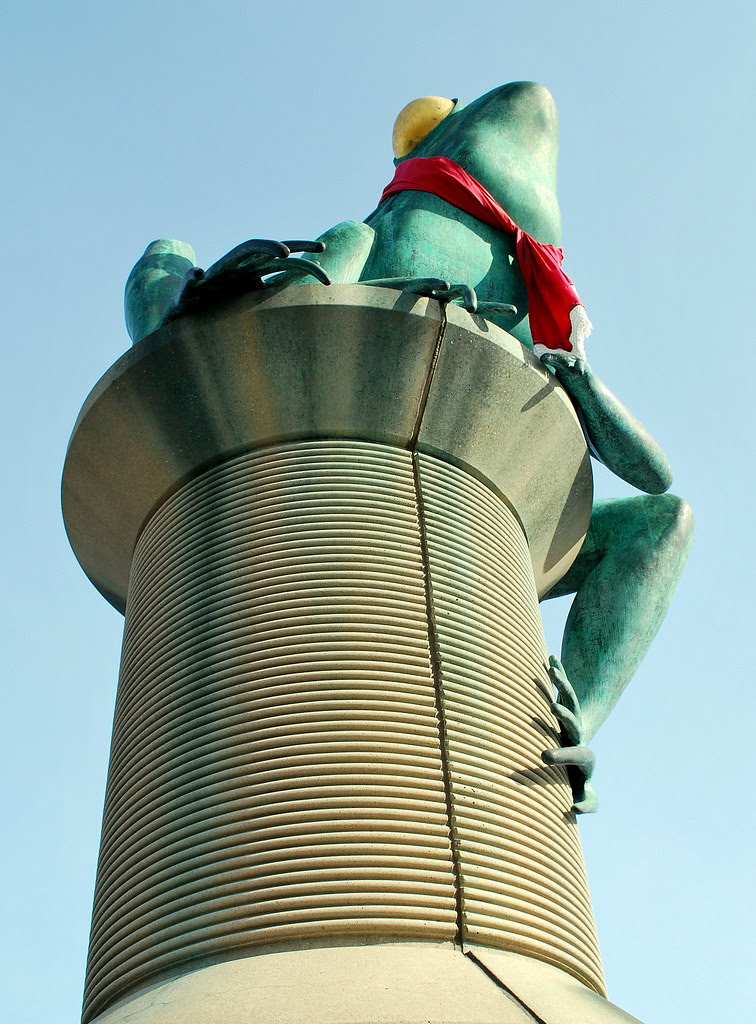 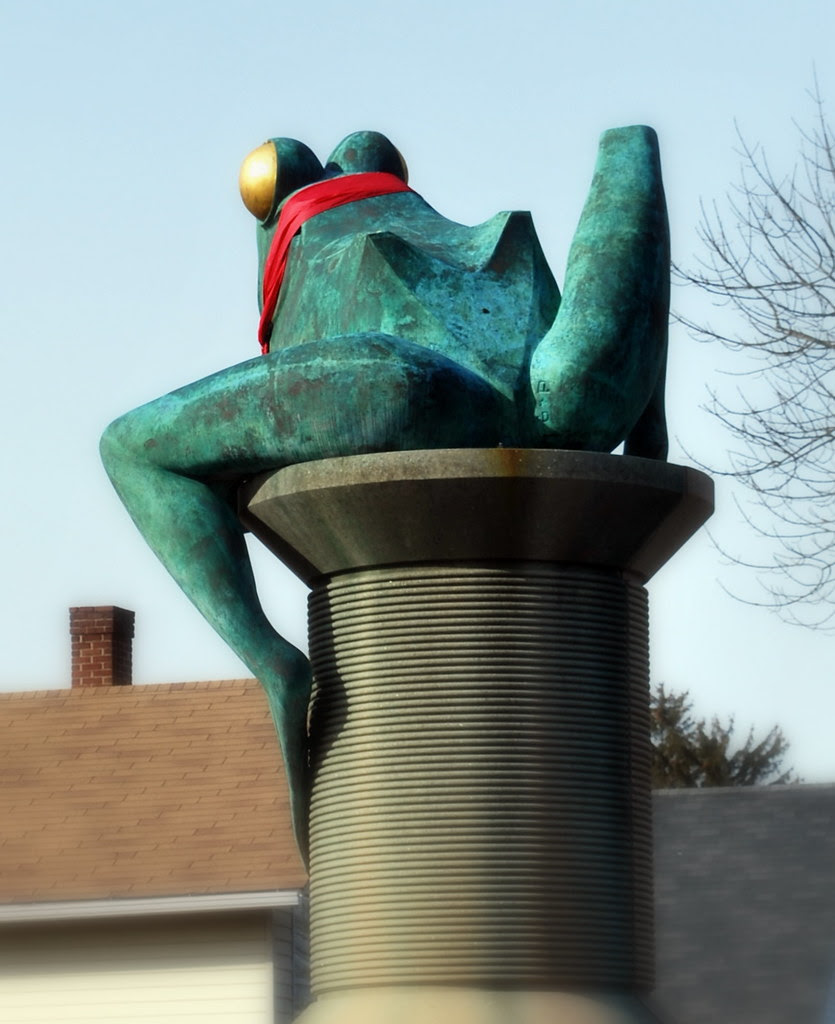