A Comfort Station of Historic Proportions

By Linda - November 07, 2011
If you've had a chance to knock around here at The Distracted Wanderer a little bit you'll have noticed the tabs just below the Blog Header that list pages with different things of interest that you can find here at the blog.  One of those tabs is titled "Comfort Station" and - though there aren't many there yet - it holds helpful links for those who may be traveling or thinking about traveling in the future.

When I first developed the page I didn't have my own picture of the historic 1904 Comfort Station located in Milton, Massachusetts that I wanted to use so I borrowed one from Wikipedia with the thought that I would someday get over to take a photo or two of my own.  After all, Milton isn't really all that far and as someone who travels to the North Shore quite frequently, I didn't think that getting my own picture was going to be an impossible task.

With that in mind, on my last trip up to Salem, Massachusetts to serve as a VIP Judge at the historic Hawthorne Hotel Halloween Ball, I decided that a stop in Milton was imperative before the unseasonably cold weather that we had been having turned into full-blown winter and a trip to the Comfort Station would have to wait until things warmed up again.  Besides, there was just enough color on the trees to make the pictures a little more interesting - especially if one is taking pictures of a restroom whether it be historic or not!


As far as "sanitaries" go this is admittedly a rather nice one with its Swiss Chalet style design and fancy chimney cap but just what - you may ask - makes this place historic? Glad you asked! 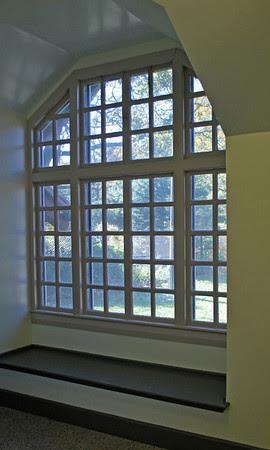 Built in 1904, the Stickney & Austin Sanitary Building was once located on a trolley line along with a building known as the "Refectory", a warm-weather refreshments pavilion.  Both buildings were designed in a rustic chalet style with dark-stained wood ornamentation, projecting square windows, and deep roof overhangs with exposed wood beams but only the Sanitary now remains and continues its use as the very thing that it was originally designed for - a seasonal public toilet facility. Instead of travelers on the trolley line, though, the historic Comfort Station now serves visitors to the Massachusetts Department of Conservation and Recreation's Trailside Museum and Blue Hills Reservation. Sitting at the base of Great Blue Hill which reaches a height of 635 feet - the highest of the 22 hills in the Blue Hills chain - the Comfort Station is located at a very popular destination for outdoor enthusiasts and is no doubt a popular destination all on its own!

The building has been very well preserved and still retains its original exterior components or replacement pieces which very closely match the originals with the exception of the doors which were replaced in 2008 during a major refurbishment. At that time, two handicapped accessible toilets were added to the south side of the building which can be seen in the fiest picture above as the two white lattice doors. The women's and men's rooms are both located up separate short stairways, men to the east side of the building and ladies to the west. The ladies room contains a rather large vestibule area with the big bay window pictured to the left - a rather nice touch I must say! 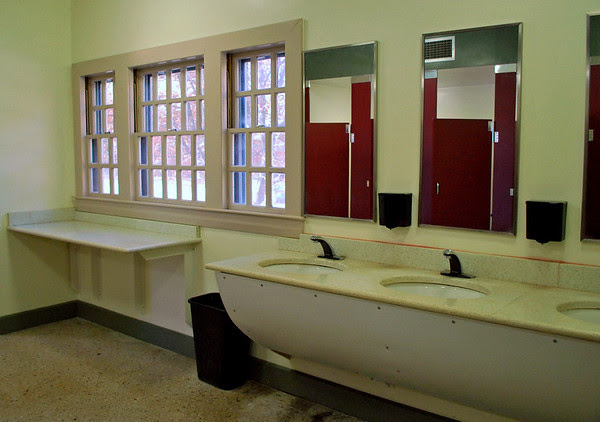 In 2008 the paneled wood toilet compartments and doors were removed and new partitions and doors as well as new sinks and counters were installed. At the same time, most of the exterior elements were repaired including windows, doors, roofing, wood trim, and the chimney. Even though it has nothing to do with the 2008 refurbishment, I'd also like to add that the ladies room was surprisingly clean - something that you sadly don't see in a lot of public sanitary facilities these days.  Obviously the facility is very well maintained so it's not only historic, it's hygienic! 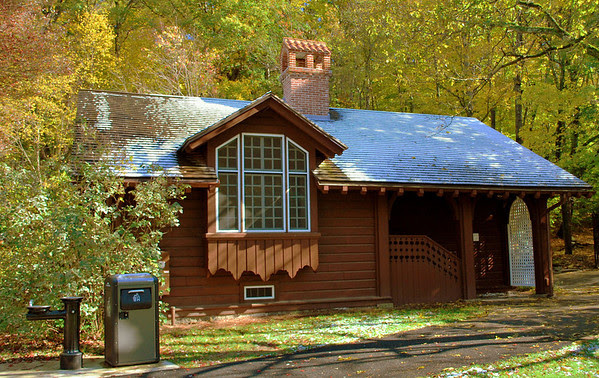 All of that aside, what really makes this a historic Comfort Station though is the simple fact that the building was added to the National Register of Historic Places on September 25th, 1980 (Reference #80000658) and how many sanitary facilities can you say that about?  Personally I can only think of one and you're looking at it which does indeed make this a Comfort Station of historic proportions!
Location: Milton, MA, USA