By Linda - April 04, 2010
Wow, it's been well over a month since I took my mini-vacation to Vermont and here I am still posting pictures!  Something tells me that I took way too may of them!  This should be the last post, though, and it contains pictures of the covered bridges that were close by where I stayed in Lyndonville as well as one other bridge that crosses the Connecticut River.  It was a bit of a drive from where I was but I really wanted to see it so didn't mind the 45-mile detour to do so. Plus it seems rather appropriate that I started out my covered bridge posts with the Cornish-Windsor Bridge crossing the Connecticut River so it seems appropriate that I end with another Connecticut River bridge!

However, before I get ahead of myself, "The Northeast Kingdom" town of Lyndon touts itself to be the "Covered Bridge Capitol of Vermont" as there are five covered bridges located within the town's borders but - to be honest with you - I really wasn't overly impressed with any of the bridges the town boasts about.  Matter of fact, one of them was so pathetic that I didn't even bother to take any pictures of it as it's located behind a motel and looked to be in pretty sad shape.  Not to be a covered bridge snob, mind you, but The Sanborn Bridge, which is privately owned, was just too sad and pathetic standing out there behind the Lynburke Motel looking all forlorn and beat-to-heck that even though I drove past it at least four times, I just couldn't bring myself to stop.  I'm thinking maybe it looks better in the warmer months?

Anyhow ... what other bridges did Lyndon have to offer?  Well, there's the Schoolhouse Bridge which was built in 1879 and replaced a much-criticized uncovered bridge that spanned the south branch of the Passumpsic River. 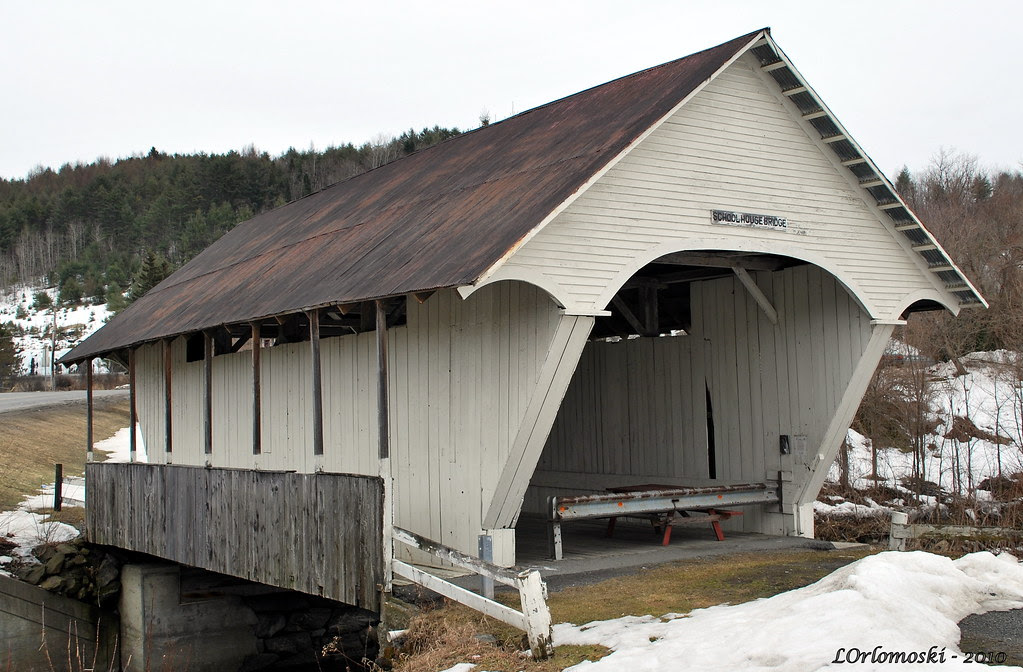 The bridge is of the Queenspost style and has a 42-foot span.  It's builder made its eaves wider than normal as a way to protect the side of the bridge so it almost looks like it has wings.  The bridge is off the road but does still span the river so even though it looks like it's seen better days, it's still a darned sight better than the aforementioned Sanborn Bridge. If you look inside at the walls of the bridge, you'll see that it is possibly the only covered bridge in Vermont to have both sides of the trusses boarded in order to keep school children from climbing on them!  Ah, those pesky school children! 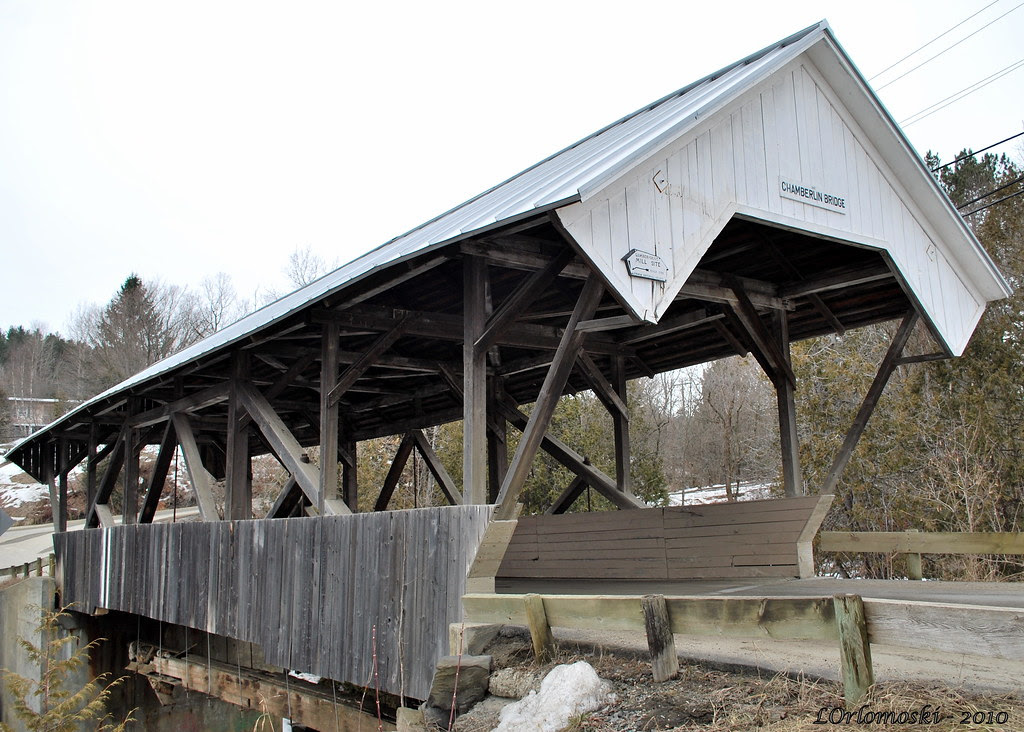 This bridge also crosses the south branch of the Passumpsic River also known as Branch Brook and is another Queenspost style with a span of 66 feet. 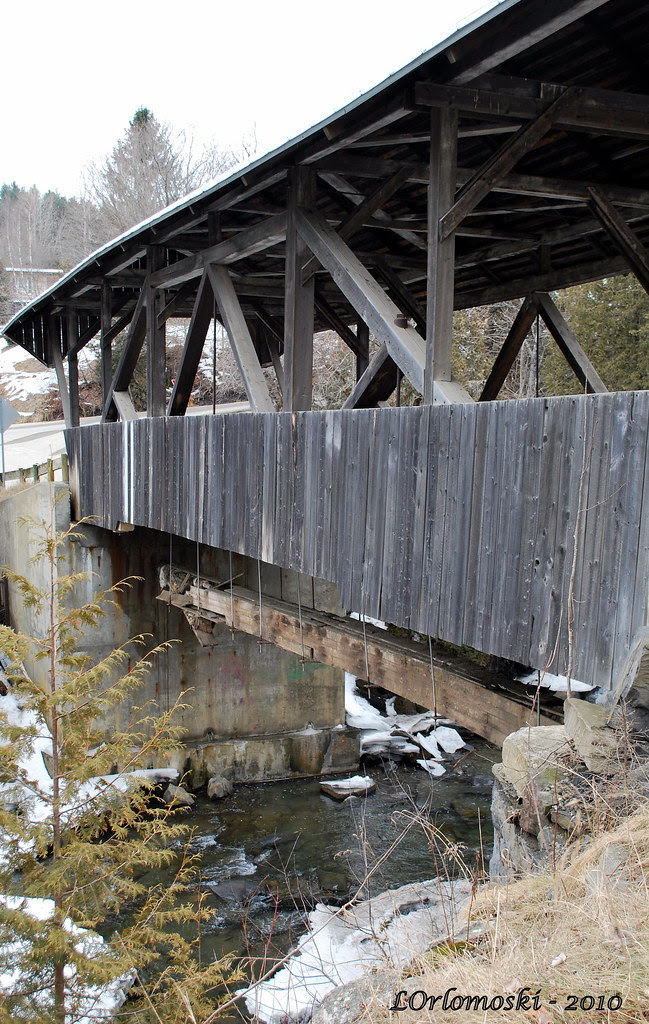 The Chamberlin Bridge is unique in that has very distinctive and open gables which allows better driver visibility though I suspect that doesn't help protect the roadway all that much when the wind and rain are blowing inside.  There was actually quite a bit of traffic over this bridge while I was taking pictures but not near as much traffic as there was going over Miller's Run Bridge aka the Bradley Covered Bridge. 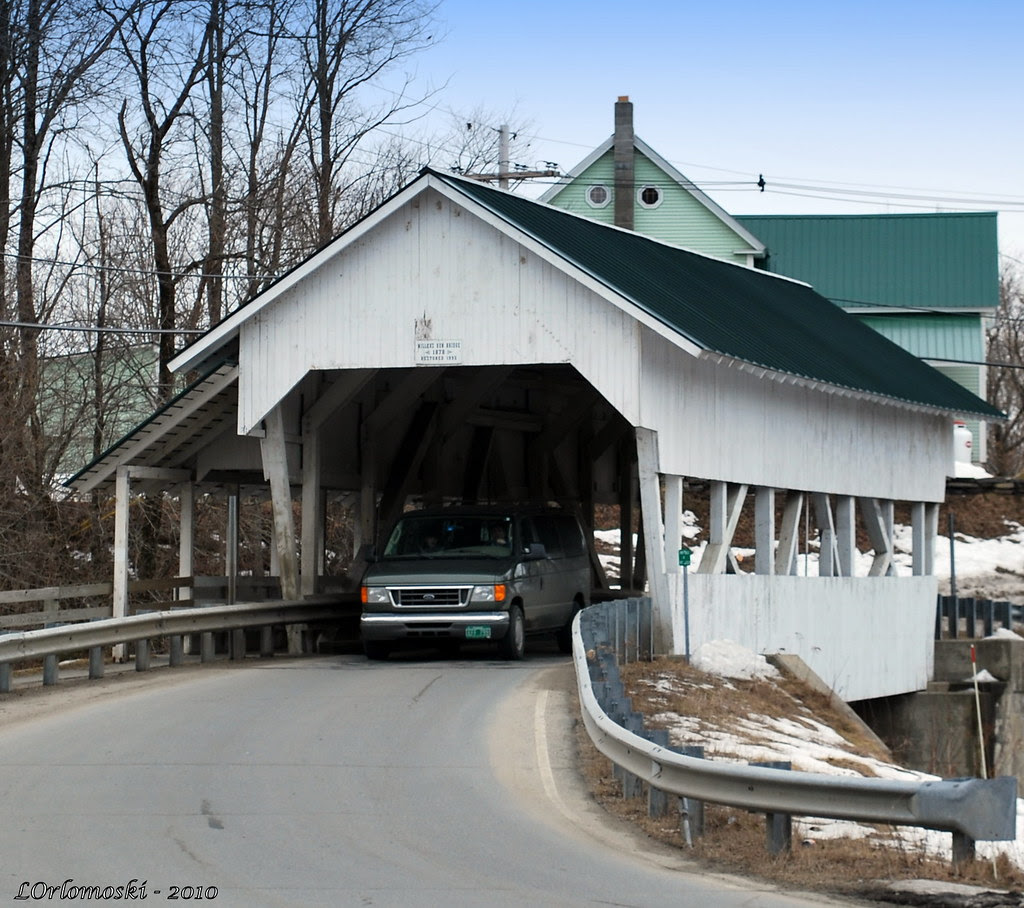 Originally built in 1878, this 68-foot Queenspost style bridge which spans Miller's Run on Route 122 was totally reconstructed in 1995 and is the only covered bridge in Vermont still in active use as part of the State highway system. 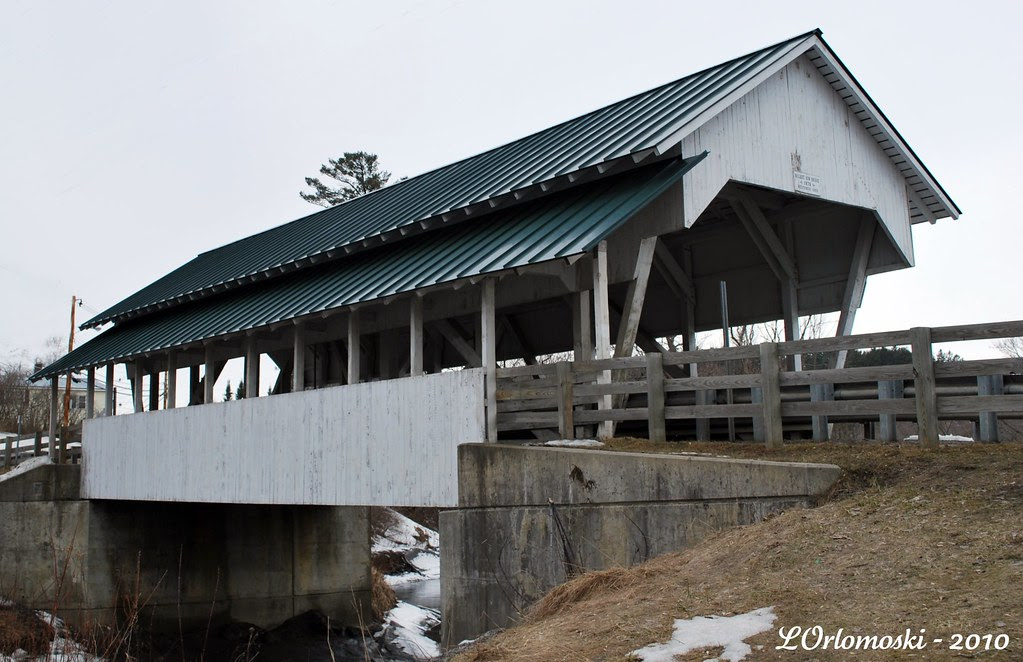 One of the most interesting features of the Chamberlin Mill Bridge is the covered pedestrian walkway that runs along the side of the bridge.   Considering the amount of traffic that goes over this one-lane bridge, a walkway for pedestrians was a great idea!

The last covered bridge in the Lyndon area was the Randall Bridge that is located on the outskirts of town heading towards the village of Burke. 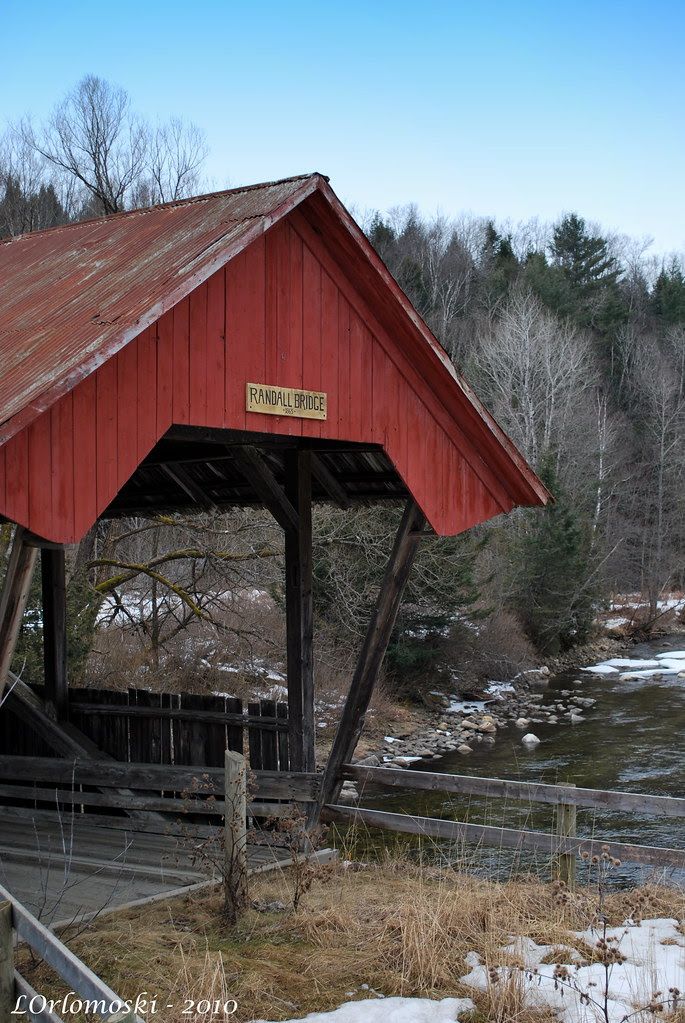 Built in 1865, the 68-foot Randall Bridge crosses the east branch of the Passumpsic River just off of Route 114 and is of the open Queenspost design. 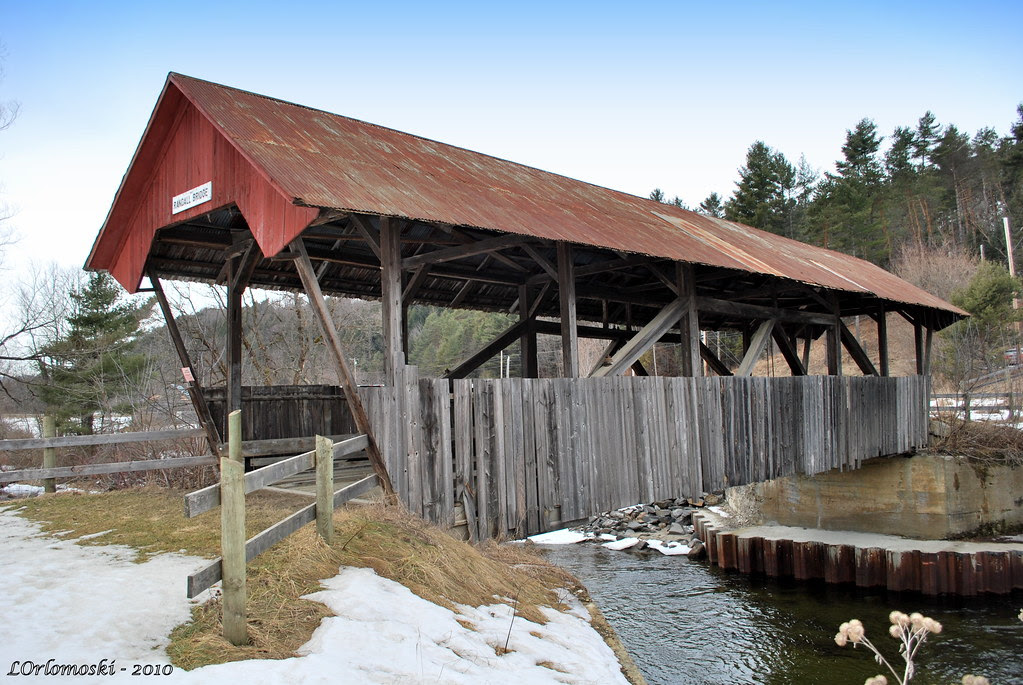 A new cement bridge was built adjacent to the Randall Bridge in 1965 but the original bridge was left to span the river.  For awhile it was used as a snowmobile crossing but there are signs posted now that the bridge has been deemed unstable and it's not even wise to walk across it.  I didn't and maintained a healthy distance while taking pictures of what was obviously a worn deck. 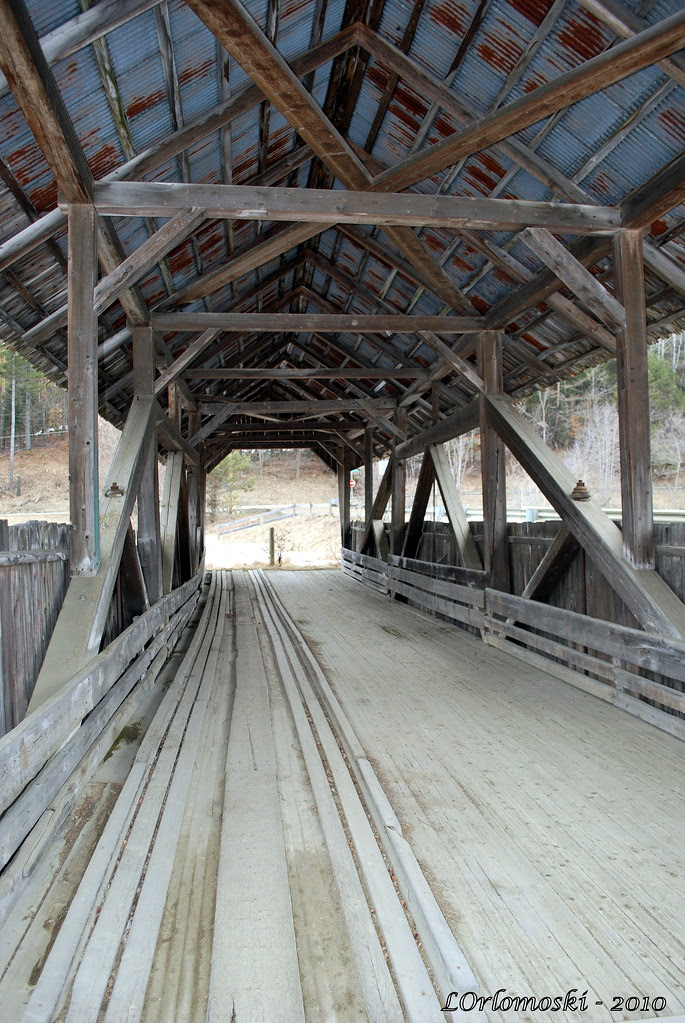 Finally leaving Lyndon behind I drove east on Route 2 towards New Hampshire in search of the Mount Orne Bridge which spans the Connecticut River between Lunenberg, Vermont and Lancaster, New Hampshire. 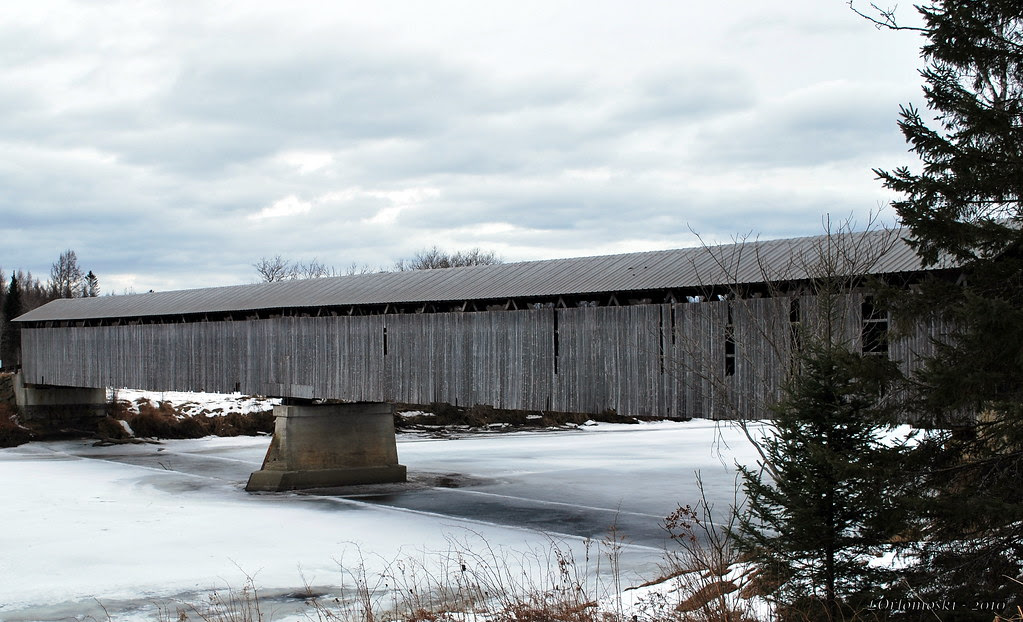 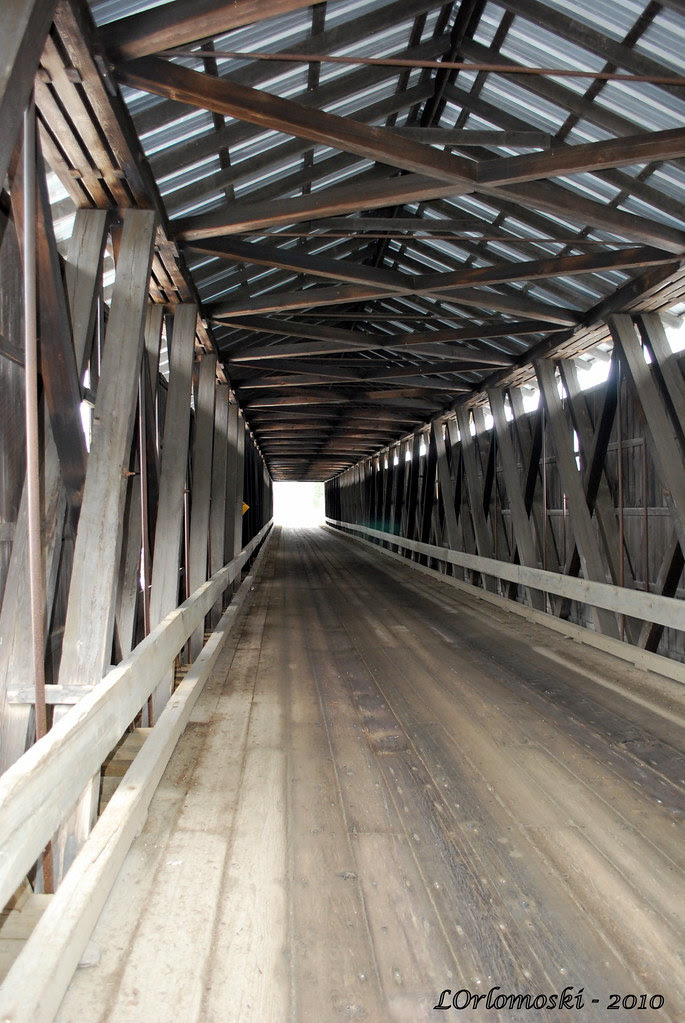 The bridge uses William Howe's wood and steel design and consists of two spans with a total length of 266 feet.  The bridge, like the Cornish-Windsor Bridge that I wrote about earlier, is technically a New Hampshire covered bridge as the state line is at the western shore of the river and it only "touches" Vermont but I wasn't going to squabble as I really liked the weathered look of it. 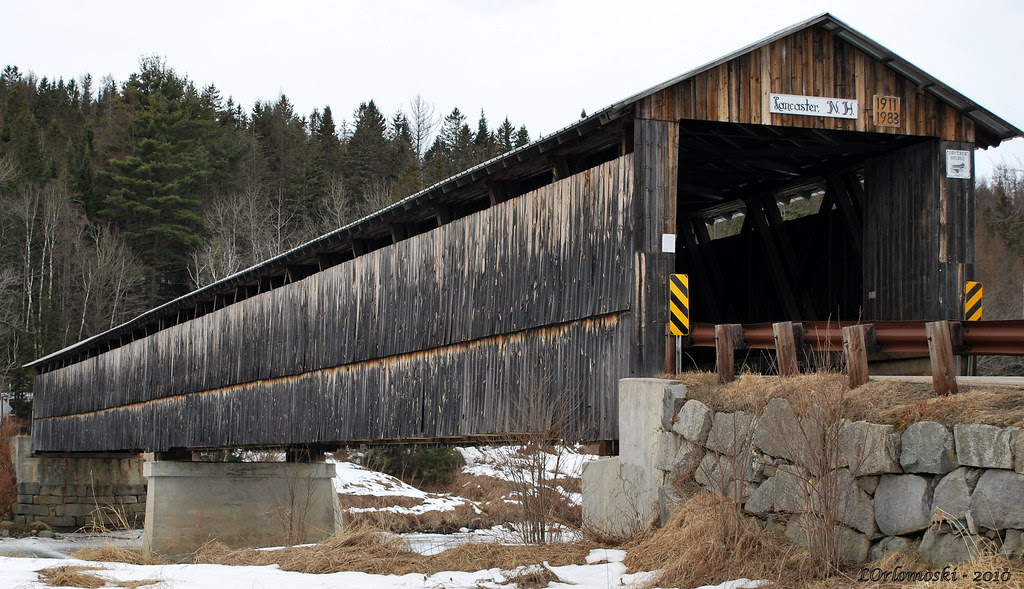 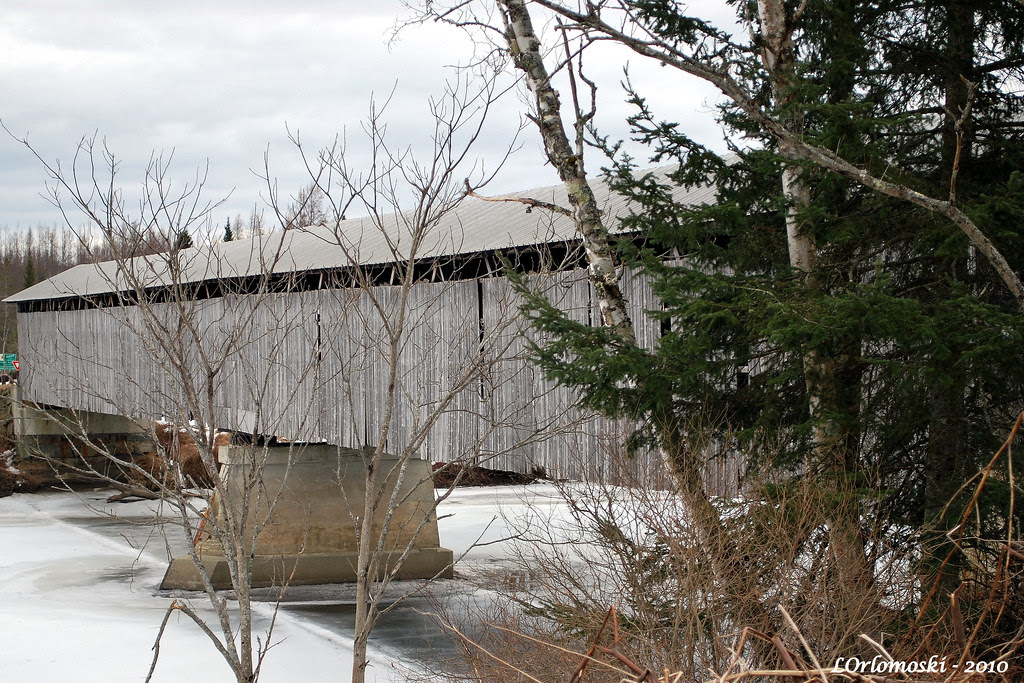 Listed on the National Register of Historic Places, the single-lane Mount Orne bridge was rehabilitated in 1983 and, for being out in what was seemingly the middle of nowhere, gets a decent amount of traffic.  I was actually rather surprised at the number of cars that crossed the bridge while I was there. I did manage to snap one picture while driving across the bridge ... 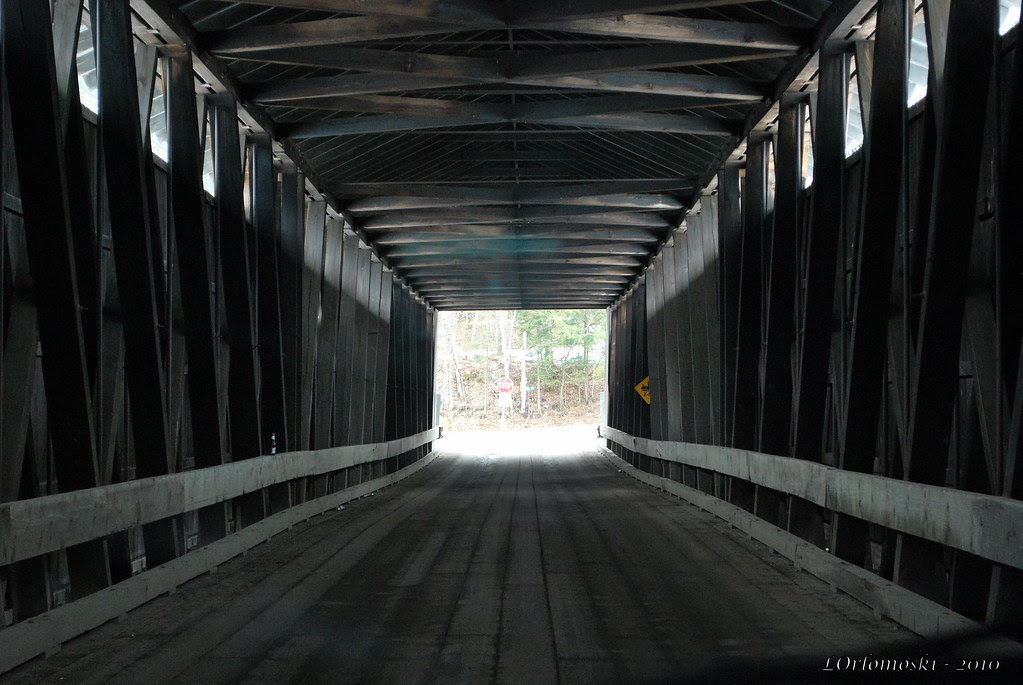 ... but as soon as I slowed down for the one shot, I noticed that someone had pulled up to wait for me to get through the bridge so that they could cross.  Oh well, at least I got one picture!

After leaving the Mount Orne Bridge and the frozen Connecticut River behind, I decided that it was time to head for home.  I'd really enjoyed my time off on my own and the chance to see at least some of Vermont's many covered bridges though I've still got a rather lengthy list of other bridges in the State so perhaps next time I'll head towards the west and see what I can find in that direction. There's got to be a next time, right?  After all, as J.R.R.Tolkien wrote in The Hobbit:


"The Road goes ever on and on
Down from the door where it began.
Now far ahead the Road has gone,
And I must follow, if I can,
Pursuing it with eager feet,
Until it joins some larger way
Where many paths and errands meet.
And whither then? I cannot say." 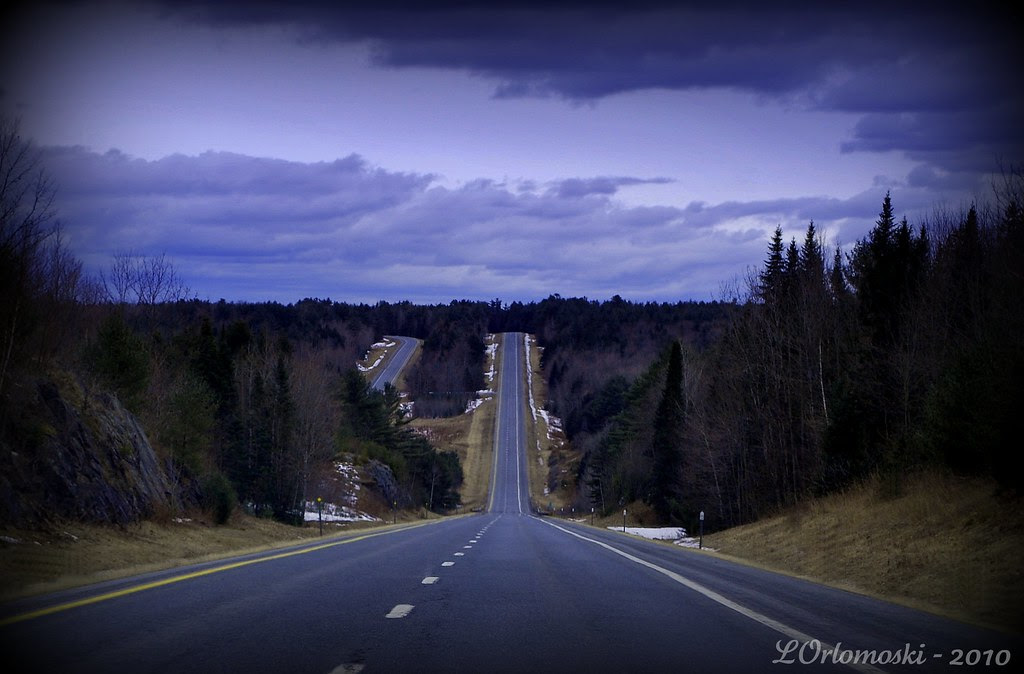