The Hampton Inn of Salem, Massachusetts

I recently wandered up to one of my favorite haunts in New England - Salem, Massachusetts - even though October is generally not a time I would go to Salem as normally it's THE big month for the Witch City and you can't find a hotel for less than an arm and a leg no matter what time of the month it is. This year, though, things are a lot different due to the ongoing Covid-19 pandemic as the city's annual Haunted Happenings has been canceled and everything else is scaled back. With all that, I figured it was actually the perfect time for me to head up and learn more about a subject that has interested me since 7th grade - the 1692 Salem Witch Trials - without the usual big crowds.

Turns out it was a most excellent time to go as I was able to score an amazing deal on Booking.Com for a two-night midweek stay at the brand-new, recently-opened Hampton Inn located on Dodge Street in downtown Salem. 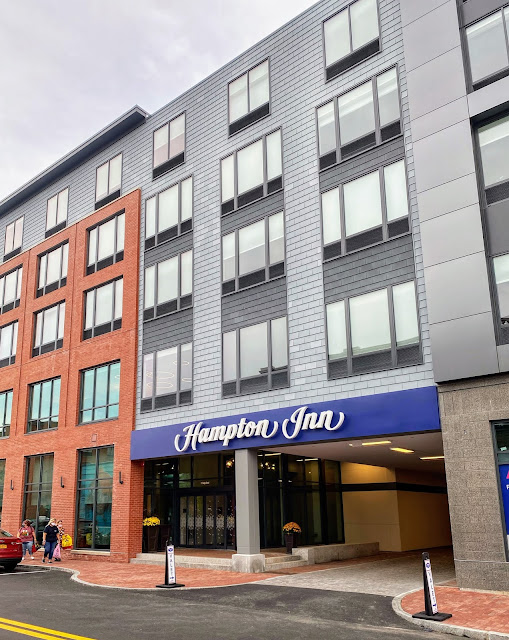 The hotel is within easy walking distance of pretty much anything you're going to want to see/do in Salem so valet park the car ($18 a night) and enjoy being in a convenient location while you also enjoy the other amenities that the hotel offers like an indoor pool and fitness center - provided there's no pandemic and they're open! 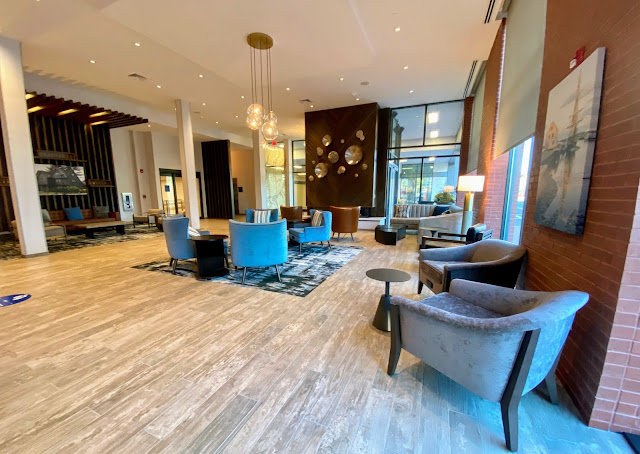 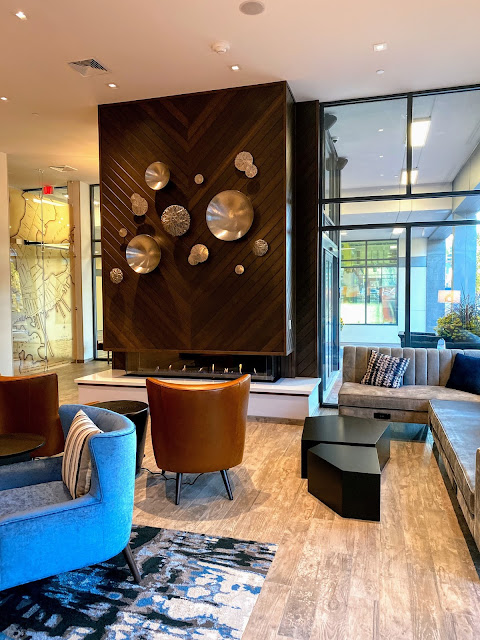 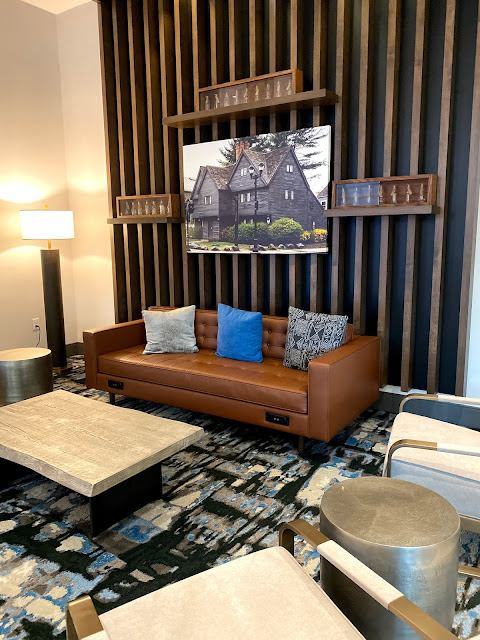 The hotel's lobby offers plenty of seating (which has built-in plugs so you can charge those all-important electronics!) along with a nice fireplace and lots of great photos of Salem attractions. There's also a 24-hour coffee bar over there on the right in the photo below where you can get a nice cup of something hot to drink - coffee, tea or hot chocolate - whenever you feel the need. 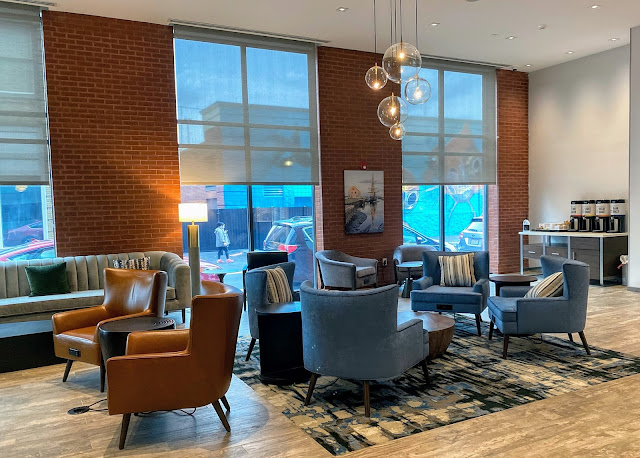 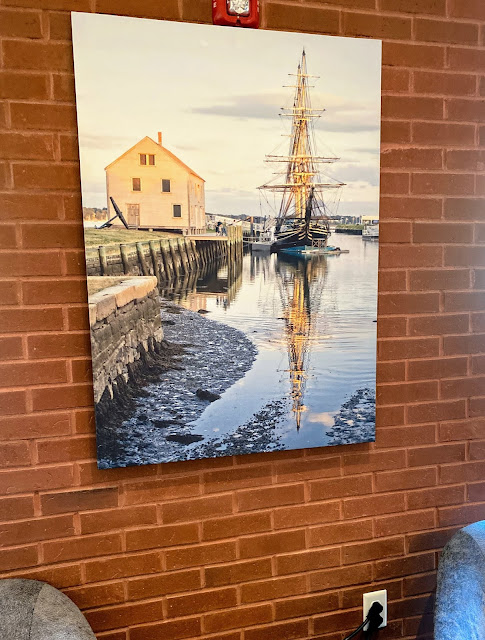 Speaking of photos, I'm pretty sure I've taken some very similar to this one of Salem's Friendship docked down at the Salem Maritime National Historic Site!

During our stay we were in a non-smoking double room on the 4th floor. My distracted sidekick thought the room number was pretty funny as they immediately associated it with an internet error! 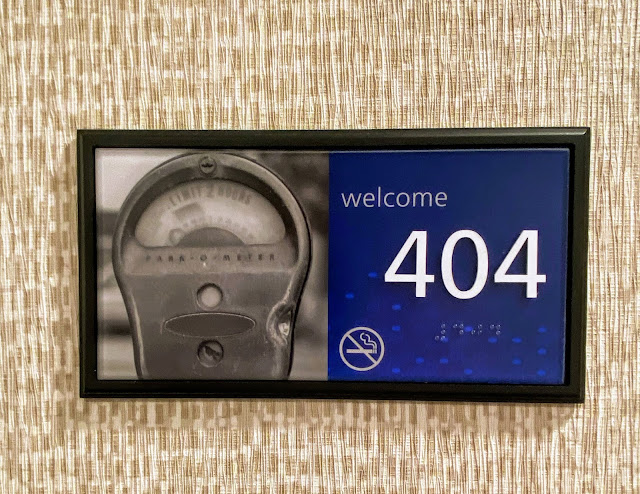 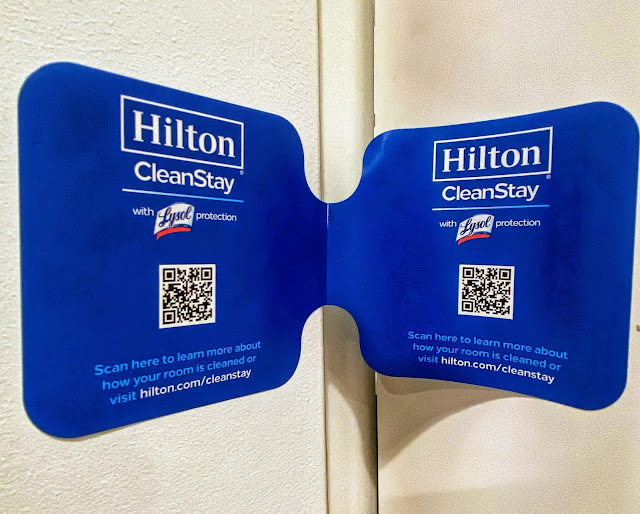 Breaking the seal on the door we went in and found that the room itself was great - very large with a mini-fridge, microwave and coffee maker in case you didn't want to go down to the lobby for your caffeine fix! There were USB plugs on the nightstand which is something that all hotels should have this day and age and a nice closet plus hooks on the wall to store your stuff. 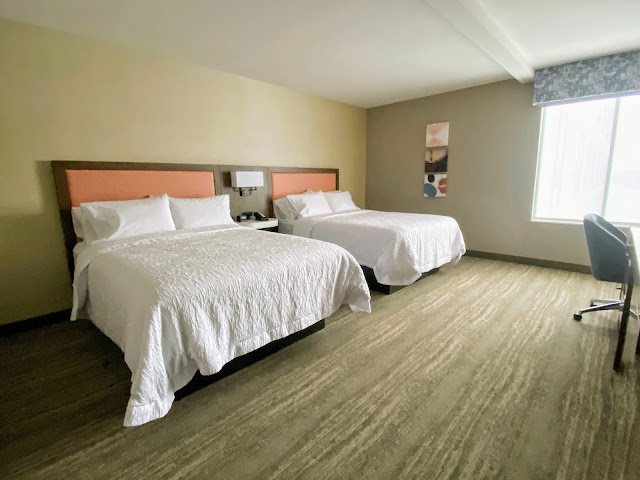 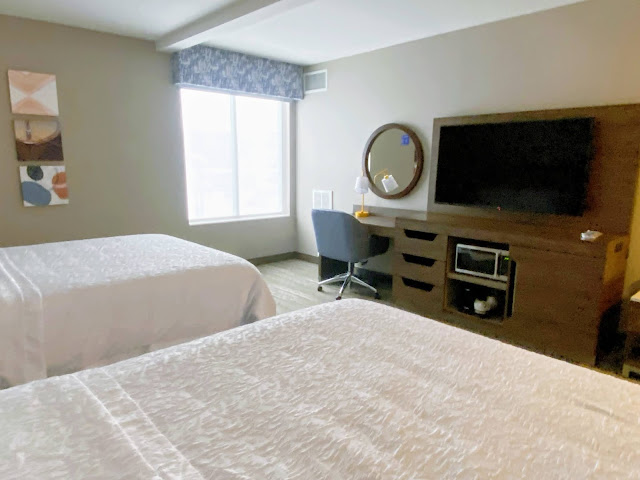 The bathroom was also spacious and had a great walk-in shower along with lots of fluffy white towels, complimentary shampoo, conditioner, lotion and soap as well as a hairdryer for those of us who hate to drag theirs along with us. 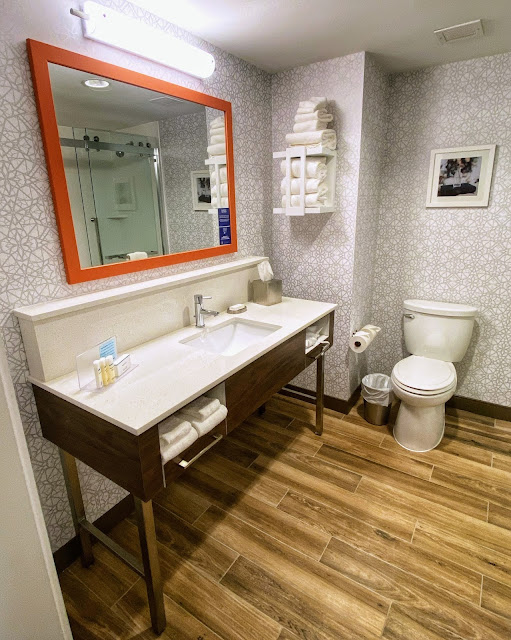 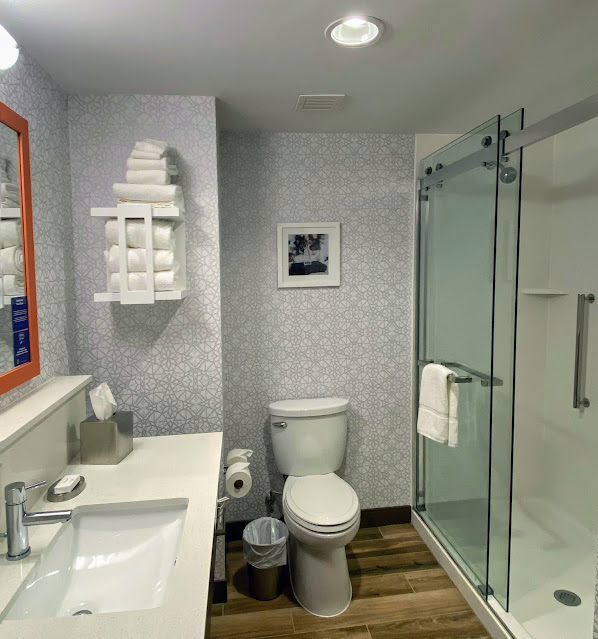 The bathroom door was also the closet door which was actually kind of cool as it slid along quietly in its track. 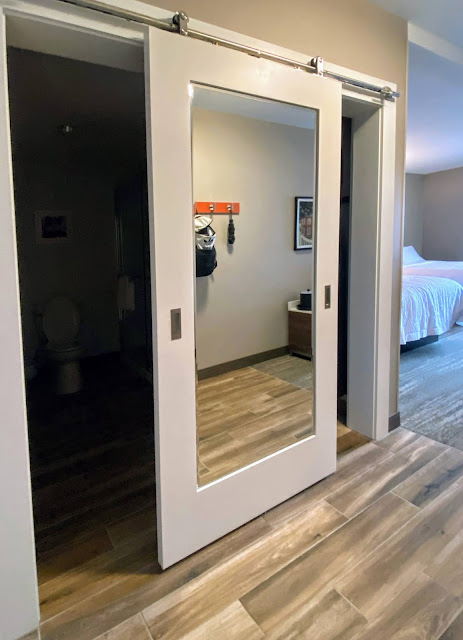 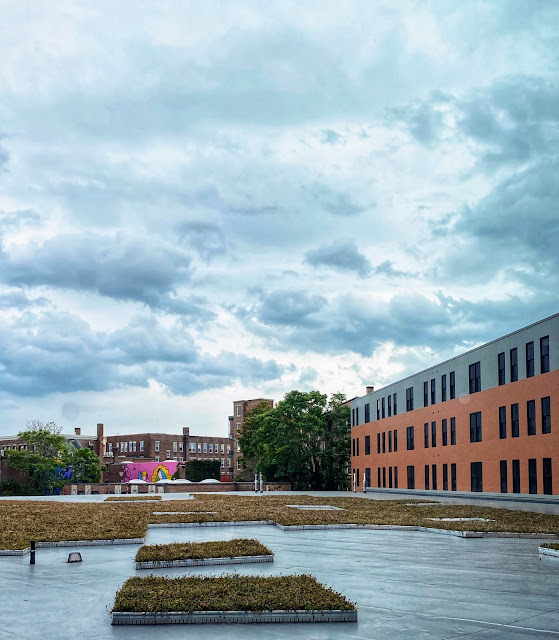 Our room faced the back of the building with a view across the roof where it looked like there must have been some pretty flowers earlier in the year. We had a bit of a storm blow through while we were there so also had a nice view of a partial rainbow later in the day. 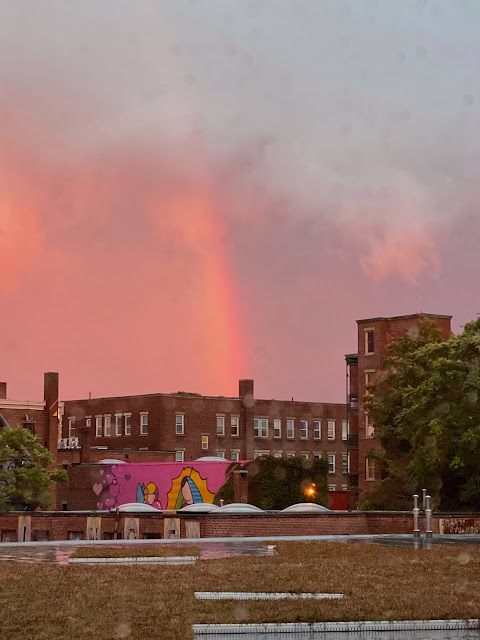 The Hampton Inn Salem offers a daily complimentary breakfast which - when there isn't a pandemic - should look like the photo below taken from their website. 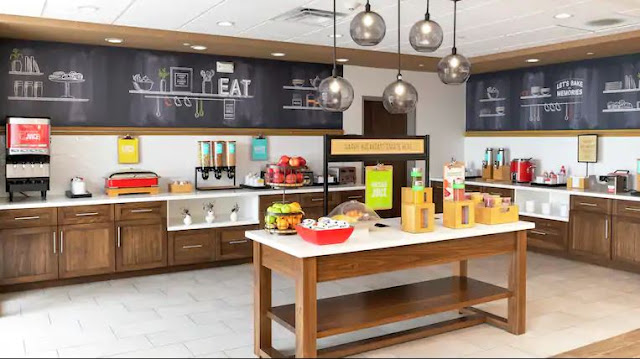 As there is a pandemic going on as of this writing, what the complimentary breakfast actually looks like right now is this: 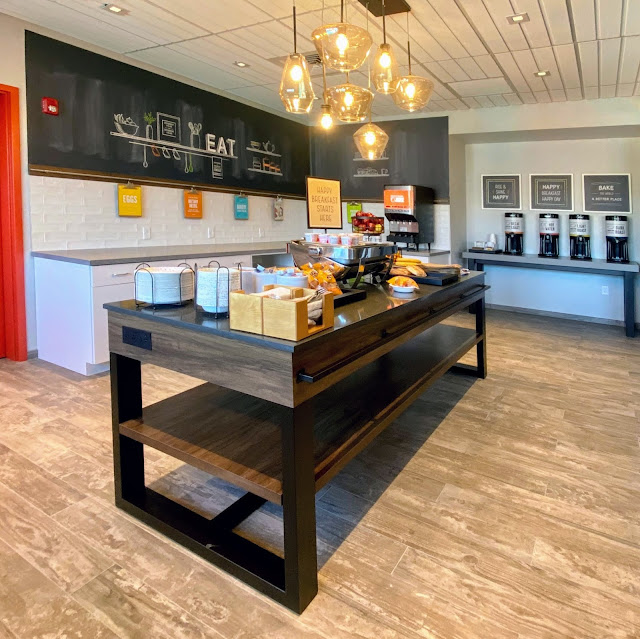 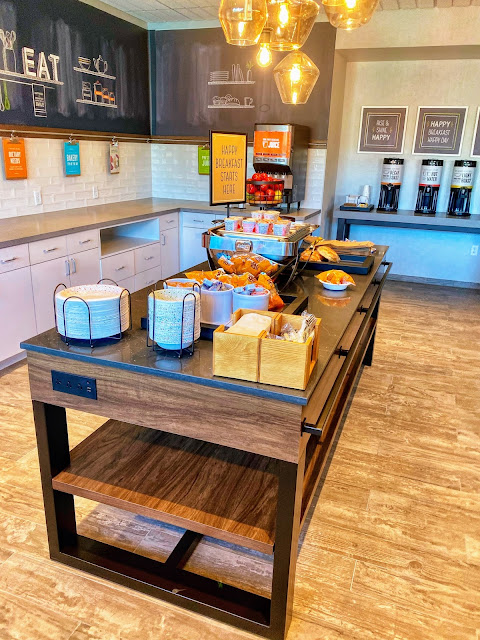 Even though it seems a little sparse at this point, it's better than no complimentary breakfast which is how some hotels have chosen to handle things. If you don't want to enjoy your packaged pastries, yogurt, fruit, juice, coffee, etc. in the hotel's very nice 3rd floor breakfast area, you can put everything into a provided paper bag and take it back to your room to nosh on instead. 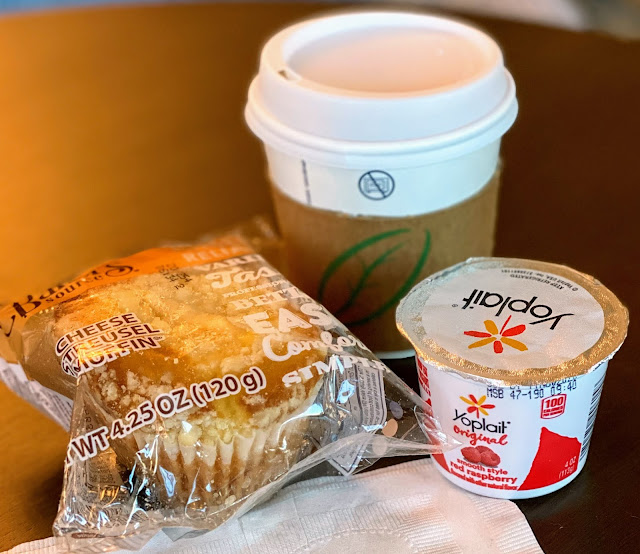 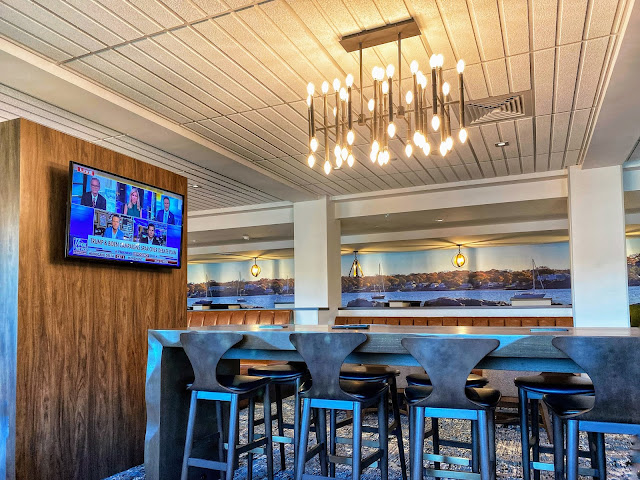 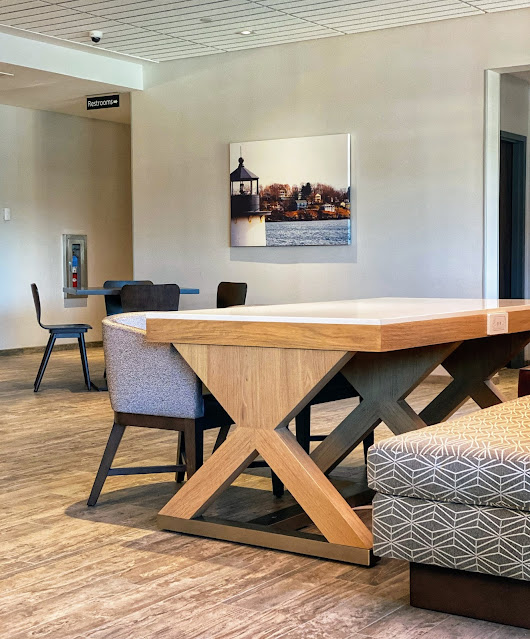 While you're on the 3rd floor grabbing breakfast, be sure to take a look across the street at this great goldfish mural painted on the back of the nearby Walgreen's! Part of the Punto Urban Art Museum, this mural was created by @jeks_nc who had this to say about his mural on Instagram: “What if we traded places with some goldfish so we were actually the pets and they were looking in at us in 2020 like, “yooo my humans wtf is going on in there?!”
FYI, the Punto Urban Art Museum is a project of the North Shore Community Development Coalition (NSCDC) that aims to create neighborhood pride and increase economic opportunity for local businesses. Located in the “El Punto” Neighborhood (aka The Point) in Salem, the Open Air Museum features over 75 large scale murals by 30 world renowned and 25 local artists within a 3 block radius. Currently the Educational Tours the museum offers are on hold (damn this wretched virus) and as I didn't get a chance to walk around and check out more of the murals on my own this trip, it's definitely something to put on my list for next time! 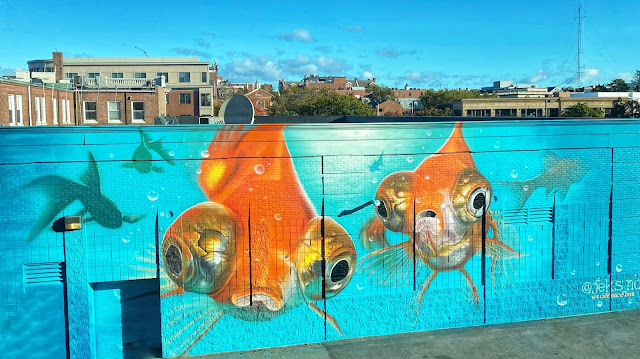 Even though the pool was closed for Covid precautions and I didn't have time to check out the fitness center, I have to say that I was very impressed with not just the Hampton Inn Salem itself but also with the staff who were all very friendly and helpful from the valet parking attendant to the desk clerks to the housekeeping staff.

Currently housekeeping in the rooms is only as requested but as I was leaving one afternoon, I said 'hello' to one of the housekeepers who asked me if we needed anything in our room. I said that it might be nice to have the trash emptied but we didn't require anything else and sure enough, when I returned not only had the trash been removed but clean towels had also been replenished in the bathroom. It's those little touches that make a place special! 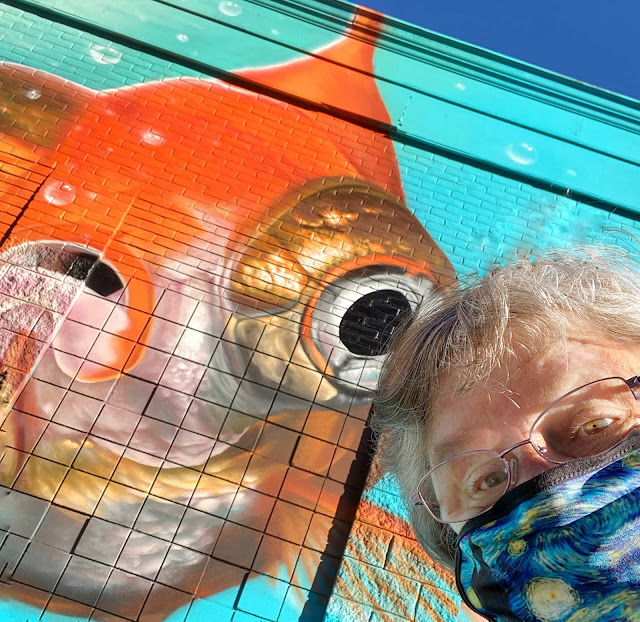 Before heading home, I took a moment to take a bit of a selfie with the awesome mural because how could I resist?

Next time you're going to be wandering around Salem and wondering where to stay, I highly recommend the Hampton Inn Salem which is a part of the Hilton family of hotels.